Aryan, along with his friends Arbaaz Merchant and Munmun Dhamecha were granted bail on Thursday by Bombay High Court and are awaiting release from the jail anytime 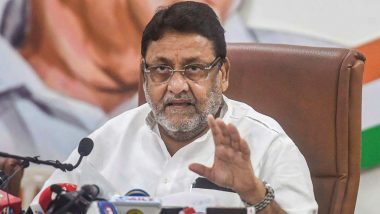 Mumbai, Oct 29: Nationalist Congress Party Minister Nawab Malik on Friday demanded the arrest of Fashion TV India head Kashiff Khan, the 'bearded man' whom he identifies as the chief organiser of the cruiser party raided by the Narcotics Control Bureau on October 2.

"I have spoken of the 'bearded man' aboard the Cordelia cruise ship, who was dancing with a girl... He is Kashiff Khan, the India chief of Fashion TV channel, who was present on the Mumbai-Goa cruise," Malik told mediapersons, continuing his exposure series on the NCB Zonal Director Sameer Wankhede.    Mumbai Cruise Drugs Case: 'We Have Been Waiting for This Moment for 34,560 Minutes', Says Arbaaz Merchant’s Father Aslam Merchant After Son Gets Bail

"We have also come to know... rather, the NCB has said that they were planning the raids for around a month. During the course of this one month of planning and investigations, was the NCB unaware as to who has actually organised the (rave) party?," Malik asked.

Responding briefly. Wankhede trashed Malik's charges saying: "Its an absolute lie... the law will take its own course."

Malik shared the videos of Khan dancing in that party which was raided by the NCB and among the persons arrested were Aryan Khan, son of Bollywood megastar Shah Rukh Khan.

Aryan, along with his friends Arbaaz Merchant and Munmun Dhamecha were granted bail on Thursday by Bombay High Court and are awaiting release from the jail anytime.

Two others secured bail from the Special NDPS Court earlier this week, and another 15 are still in custody in the same case in which Wankhede is under the scanner of the NCB and the Mumbai Police.

(The above story first appeared on LatestLY on Oct 29, 2021 05:16 PM IST. For more news and updates on politics, world, sports, entertainment and lifestyle, log on to our website latestly.com).