Mumbai-Delhi Maximum Flight Ticket Fare to be Rs 10,000 For 3 Months From May 25; Check Details And Airfare Caps Announced by Aviation Minister Hardeep Puri 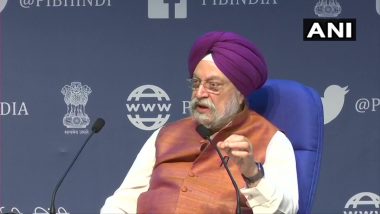 New Delhi, May 21: Civil Aviation Minister Hardeep Singh Puri at a press conference on Thursday shared details about capping of flight tickets and other details. He said that in the case of Delhi-Mumbai the minimum fare would be Rs 3500 for a journey between 90-120 minutes, the maximum fare would be Rs 10,000. This will be operative for three months - till one minute to midnight on August 24.

He further added, "For operations from metro to non-metro cities and vice-versa, where weekly departures are less than 100, airlines free to operate any routes of 1/3rd capacity of approved summer schedule 2020. For all other cities, airlines are free to use 1/3rd capacity of approved summer schedule 2020." Rules For Passengers, Airlines: Self-Declaration Form Mandatory; Here's What is Allowed at Airports And During Flight Travel, What Isn't.

Talking about the safety precautions that need to be taken also includes the cabin crew to be in full protective gear. Only one check-in bag per person will be allowed. Passengers also need to report before at least two hours before departure time.

A self-declaration or Aarogya Setu App status on a compatible device would be obtained to ensure that a passenger is free of COVID-19 symptoms. The Minister further informed that passenger with red status on Aarogya Setu App will not be allowed to travel. The flights will resume operations from March 25, two months after domestic and international flight operations were suspended.

(The above story first appeared on LatestLY on May 21, 2020 03:50 PM IST. For more news and updates on politics, world, sports, entertainment and lifestyle, log on to our website latestly.com).