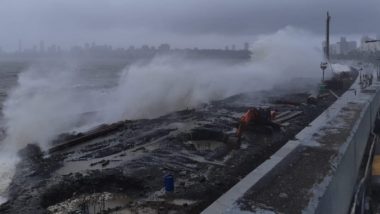 A rain warning has also been issued for Kolhapur, Pune, Raigad, Ratnagiri, Sindhudurg, Satara, Sangli, Solapur, Parbhani, Beed, Hingoli, Nanded, Latur and Osmanabad. According to IMD's Mumbai centre, the state is likely to receive heavy downpour till October 16. "There is an extremely low-pressure area in the Bay of Bengal and the clouds developed because of it would be hovering on Maharashtra from October 14 to 16," an IMD official told news agency PTI.

On October 13, KS Hosalikar, deputy director-general, western region, IMD, had said that due to the formation of the deep depression over West Central Bay of Bengal and its gradual west-northwestward movement, rainfall activity over most parts of Maharashtra is expected to increase in the next four to five days. "North Konkan, including Mumbai, Thane and Raigad, are also expected to receive heavy spells on October 14 and 15," he had predicted.

(The above story first appeared on LatestLY on Oct 14, 2020 06:49 PM IST. For more news and updates on politics, world, sports, entertainment and lifestyle, log on to our website latestly.com).