According to initial reports, the fire erupted at a newly-constructed building of Sancheti hospital located on Kingsway road. 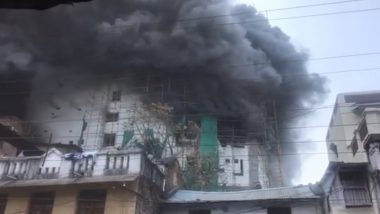 Nagpur, January 9: At least seven people were injured after a huge fire broke out at a hospital building on Wednesday afternoon. Two of the injured persons were critical. The fire erupted at an under-construction building of Sancheti hospital located on Kingsway road near KP ground in Nagpur.

Visuals from the spot showed thick black smoke billowing from the 10-storey structure. The cause of the fire was not immediately ascertained, however, a short circuit is believed to have sparked flames.

"The fire has been controlled now, a search operation is underway. The fire could have been caused due to a short circuit as construction work was underway at the building," Sunil Raut, a fire official, said. No casualty has been reported.

Five fire tenders were rushed to the spot after which the blaze was doused. Reports say Army jawans helped firefighters in dousing the blaze.

Construction was reportedly underway when the fire broke out. A rescue operation was underway.

(The above story first appeared on LatestLY on Jan 09, 2019 03:06 PM IST. For more news and updates on politics, world, sports, entertainment and lifestyle, log on to our website latestly.com).