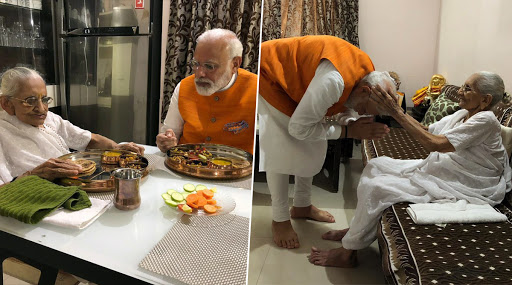 Gandhinagar, September 17: Prime Minister Narendra Modi on the occasion of his 69th birthday met his mother Heeraben Modi at her residence, in Gandhinagar. PM Modi took blessings from his mother. He also had lunch with her. The Prime Minister is in Gujarat to celebrate his birthday. Ahead of PM Modi’s birthday, the entire Sardar Sarovar Dam at Kevadia in Narmada district of Gujarat was illuminated with bright coloured lighting on Monday night. Narendra Modi 69th Birthday: BJP Leaders Extend Greetings to PM, Call Him an ‘Inspiration for All’.

PM Modi Having Lunch With His Mother:

On the occasion of PM Modi’s birthday, school children in Siliguri also extended their wishes in an unique way by dressing up like Prime Minister Modi and wearing masks in his likeness. Students of a private school, Siliguri Bright Academy, greeted Prime Minister Modi on his special day by putting up banners, wearing Modi's mask, holding placards and donning bespoke attire just like him. Top political leaders and celebrities also wish the PM on his 69th birthday.