NTA said it will file a FIR against those circulating wrong news. NTA released an official statement to counter fake and incorrect NEET results being circulated on social media and some news channel. the agency has assured to settle the genuine discrepancies It has also warned parents and students to beware of any false claims of admission to medical colleges. 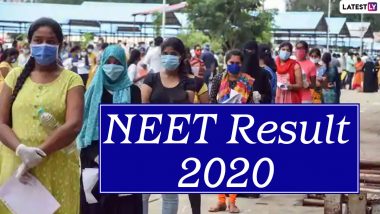 New Delhi, October 21: The National Testing Agency (NTA)  on Tuesday said it would lodge an FIR under the IT Act for circulation of “manipulated and fake news.” A NEET 2020 aspirant, Mridul Rawat, who had obtained 329 marks in NEET had tweeted to the NTA challenging his results. Later, he claimed to have received a fraudulent e-mail which said that he was the topper in ST category with 650 marks. However, reports saying that he indeed was ST topper while NTA declared him as 'failed' had been doing the round on media and social media. NTA has, however, refuted these reports.

The National Test Agency (NTA) released an official statement to counter fake and incorrect NEET results being circulated on social media and some news channels. The statement read, "It has been revealed on some news channels in social media that shockingly some unscrupulous elements are claiming that the results declared by NTA are incorrect. The NTA has declared the result after thorough scrutiny and assured all aspirants that the result declared by NTA is correct." Students from Delhi Government Schools Qualify NEET-JEE 2020 with Flying Colours.

It also said, "However, manipulated and fabricated cases will be viewed seriously and NTA will be forced to take legal action as per laws of the land against such candidates including cancellation of their candidature or other unscrupulous agents representing such candidates." The agency has, meanwhile, assured to settle genuine discrepancies, if any.  NEET 2020 Exam Results: Marked '0 Out of 720', Maharashtra Girl Moves Bombay High Court, Seeks Manual Revaluation.

NTA has also advised parents and students to beware of false promises of arranging admission in medical colleges through unfair means. “Candidates in their own interest, are once again advised not to fall prey to any unscrupulous person/agent/spokesperson promising them any favorable changes in their OMRs/results, else legal and punitive action, will be initiated against any/all such persons involved in spreading fake news and maligning the image and prestige of the National Testing Agency,” said the statement.

(The above story first appeared on LatestLY on Oct 21, 2020 01:07 PM IST. For more news and updates on politics, world, sports, entertainment and lifestyle, log on to our website latestly.com).