Newborn Goes Missing from a Government-Run Hospital in Hyderabad, Police Forms a Special Team to Track the Baby and Her Abductor

The Police are investigating whether there is any child trafficking group is actively operating in Bidar, a backward tribal belt of the region. 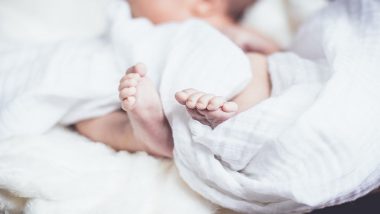 Hyderabad, July 4: A newborn has been abducted from one of the government-run hospitals in Hyderabad on Sunday. According to a news report in the NDTV, the parents were at the hospital for a round of vaccination with their newborn child when the incident took place.

Reports mention that father of the infant went outside to make photocopies of the Aadhar card which he required during the medical check-up. As the father took a long time to return, the mother of the child looked distressed since was tired of standing for a long time. Grabbing the opportunity, an unknown woman approached the mother and offered to help her by claiming to be a hospital staff. She volunteered to take the child inside for vaccination, while the mother rested outside.

Unaware of her identity, the mother promptly handed over her child to the lady. However, when she did not return with the baby even after a few hours, the mother started enquiring about her whereabouts. Later, they realised that the unknown woman was not an employee of the hospital but a child lifter.

The video below shows the CCTV footage of the woman who abducts the newborn from the government hospital:

Immediately the duo went to police station and narrated the entire incident. After that, the police filed a missing complaint and initiated a search operation. Furthermore, the police have also formed three special teams to track down the baby and her abductor.

Besides this, the CCTV camera installed inside the hospital has captured the lady with the baby, and the same lady was caught in another clip, carrying the baby and boarding a bus to Bidar district in Karnataka. So the Hyderabad police have also alerted the bidar police team. A team of police has already left to Bidar of Karnataka. The Police are investigating whether there is any child trafficking group is actively operating in Bidar, a backward tribal belt of the region.

(The above story first appeared on LatestLY on Jul 04, 2018 12:26 PM IST. For more news and updates on politics, world, sports, entertainment and lifestyle, log on to our website latestly.com).