The Anmod Ghat road will be closed for vehicles from November 19 until the further notice, informed the public notice issued by authorities in Belgaum. 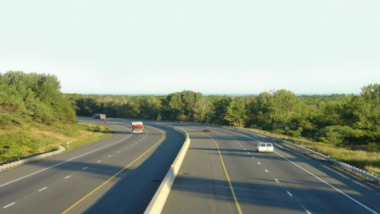 Belgaum, November 19: The Anmod Ghat road will be closed for vehicles from November 19 until the further notice, informed the public notice issued by authorities in Belgaum. This step is taken for the widening work of Karnataka-Goa highway. The notice further states that during the road closure, the light vehicles will pass from Belgaum to Goa via Chorla Ghat or via Amboli Ghat, while the heavy vehicles will be redirected through Belgaum-Chandagad-Amboli-Sawantwadi-Goa route. This will also create a problem for people travelling in Mumbai- Goa route as they have to pass via Amboli or via Chorla Ghat.

This decision was taken after the state government officials held an urgent meeting with Union Minister of Road Transport and Highway, Nitin Gadkari along with PWD ministers of Karnataka. The Belgaum-Goa expansion project is estimated to cost nearly Rs 3000 crore and the work is expected to be completed within two years. Mumbai: Traffic Restrictions Imposed on Western Express Highway, Light and Medium Commercial Vehicles Banned.

This closure is expected to create a nuisance to the residents of Dharbandora, Ponda and Sanguem talukas in Goa while they travel to Belgaum as they have to take a much longer route.

(The above story first appeared on LatestLY on Nov 19, 2018 03:33 PM IST. For more news and updates on politics, world, sports, entertainment and lifestyle, log on to our website latestly.com).