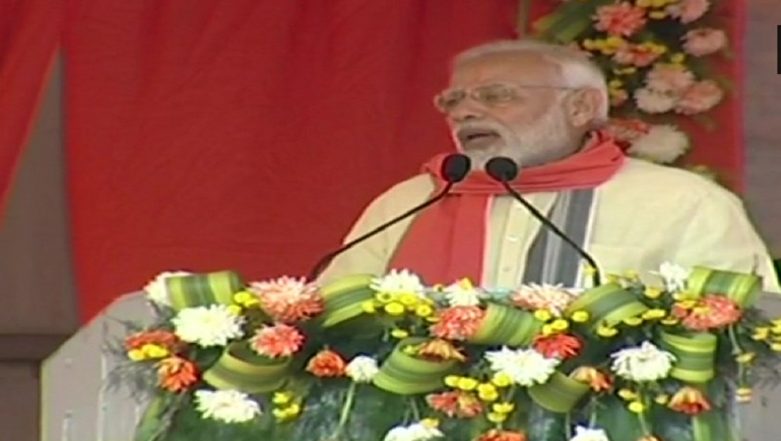 Bhubaneshwar, December 24: Prime Minister Narendra Modi today inaugurated projects worth over Rs 14,500 crore including a new campus of IIT-Bhubaneswar at Aragul during a day-long visit to Odisha on Monday. Odisha Chief Minister Naveen Patnaik and other senior Biju Janata Dal (BJD) and Bharatiya Janata Party (BJP) leaders were also present during the event. The campus was built at a cost of Rs 1660 crore. PM Modi also laid the foundation stone of the campus of Indian Institute of Science and Education Research (IISER) in Berhampur. This project is estimated to cost Rs 1,583 crore.

Apart from this, the Prime Minister laid the foundation stone of a gas pipeline from Paradip to Hyderabad at a projected cost of Rs 3,800 crore. Another pipeline from Angul to Bokaro in Jharkhand at a projected cost of Rs 3,437 was also inaugurated. These pipelines will be built under the Urja Ganja Yojana. At the event at Khurda, the PM also highlighted his government's efforts of providing 35 lakh gas connections in the state.  Bogibeel Bridge, India's Longest, to be Inaugurated by PM Narendra Modi on December 25 in Assam; Here's All You Need to Know.

Prime Minister Narendra Modi in Khurda: 35 lakh gas connections have been given to women in #Odisha. 4 and half years ago only 20% families had a gas connection, now it is 70%. In near future everyone should have a gas connection, we're working in that direction. pic.twitter.com/sogdqolx95

With a view to improving to health care facilities in the state, the PM inaugurated a new 50-bed ward of the ESI Hospital in Bhubaneswar. He also laid the foundation stone for the upgrading the old 50-bed ward of the hospital. At the event, PM Modi said that the newly built ESIC hospital in Bhubaneshwar is equipped with modern facilities. Rs 100 Coin Released by PM Narendra Modi in Memory of Atal Bihari Vajpayee; See Pic.