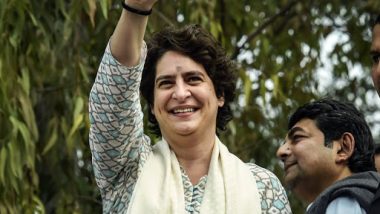 New Delhi, July 30: Congress General-Secretary Priyanka Gandhi Vadra on Thursday vacated her central government allotted accommodation at Delhi's Lodhi Estate, sources said. According to the sources, Priyanka Gandhi will return to Delhi to her permanent address after staying in Gurugram for a few days.

Priyanka Gandhi has kept all her belongings in 10, Janpath for the time being. After her new house is ready, around Sujan Singh Park area, the goods will be shifted from 10, Janpath. It is important to note that the Ministry of Housing and Urban Affairs had given a notice to the Congress leader to vacate the accommodation after Ministry of Home Affairs had withdrawn her priviledge of Special Protection Group (SPG). Priyanka Gandhi Asked to Vacate Official Bungalow In Accordance With SPG Cover Withdrawal, Given Time Till August 1.

Several Congress leaders had objected to the decision and urged the Centre to revoke the decision after the order came out earlier this month. Vadra had been asked to vacate her government accommodation in Delhi by August 1 by a government notice stating that her allotment stands cancelled from July 1.

"Consequent upon withdrawal of SPG protection and grant of Z+ security cover by Ministry of Home Affairs, which does not have provision for allotment/retention of government accommodation on security grounds to you, the allotment of Type 6B house number 35, Lodhi Estate, New Delhi is hereby cancelled with effect from July 1. One month concessional period on the same rent up to August 1 is allowed as per rules," said the ministry's notice. It further added that any stay beyond August 1 by her would attract damage charges/penal rent as per rules.