Pune Shocker: Woman Duped of Rs 91,000 by Man She Met on Matrimonial Platform

A woman was allegedly duped of Rs 91,000 by a man she had met on a matrimonial platform in Pune. A case has been registered under section 420 of the IPC and 60 (C) of the IT Act, 2000. Investigation in the matter is underway. 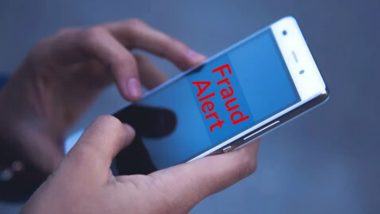 Mumbai, December 3: In another case of fraud and cheating, a woman was allegedly duped of Rs 91,000 by a man she met on a matrimonial platform. According to reports, a Pimpri-Chinchwad based engineer matched with the accused in last week of November and the duo decided to get married. Following which, the man asked the victim for some money for his mother's treatment and she transferred the money to a nationalised bank in Udupi region of Karnataka

According to a report by the Hindustan Times, the woman learned that the man had given her a false name. They had a fight over this and marriage was cancelled. The accused then started ignoring the woman's demand to return the sum she had transferred to him. Following which, she filed a complaint with the police and a case was registered under section section 420 of IPC, and 60(C) of the IT Act, 2000 in the matter. Mumbai Woman Duped of Nearly Rs 2 Lakh by ‘Friend’ on Matrimonial Site Who Posed As UK Resident.

“They matched on November 24, and the man asked for money on November 26. The fight happened soon after. The man seems to be in another state. We are investigating the case,” SI Vijay Bhongle was quoted as saying by the HT. Investigation in the matter is underway. Online Fraud in Hyderabad: 34-Year-Old Widow Duped of Rs 50 Lakh By Man Who Met Her on Matrimony Website.

Cases of frauds on matrimonial sites are not uncommon. In November this year, a Mumbai based woman was duped of Rs 6.25 lakh by a person she met on a matrimonial website. The fraudster had posed as an Indian Navy Captain on the website.

(The above story first appeared on LatestLY on Dec 03, 2021 11:21 AM IST. For more news and updates on politics, world, sports, entertainment and lifestyle, log on to our website latestly.com).