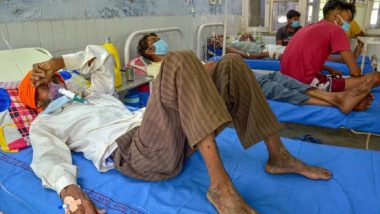 Chandigarh, August 3: The death toll due to consumption of spurious liquor jumped to 105 on Monday, with one more person reported dead in the last 24 hours. The police team probing the hooch tragedy also cracked down on 12 more accused, including two businessmen. Punjab Hooch Tragedy: CM Captain Amarinder Singh Suspends 7 Excise Officials, Announces Ex-Gratia of Rs 2 Lakh Each For Kin of Deceased.

The arrests today were made in Ludhiana region, after a team of cops from the Amritsar (Rural) police acted after being tipped off. Among those held are two businessmen are suspected to be involved in the supply of hooch to the three districts of Amritsar, Gurdaspur and Tarn Taran.

"Police today apprehended 12 more people, including 2 businessmen, and have launched a manhunt for a Ludhiana-based paint business owner who had initially supplied the 3 drums of spurious liquor," said a statement issued by the state government.

"One Moga-based businessman and another one based in Ludhiana apprehended by Amritsar (Rural) Police in connection in with hooch deaths in the state," it further added.

Out of the total fatalities, the maximum - 80 deaths - were recorded so far, followed by 13 in Gurdaspur's Batala and 12 in Amritsar. Officials while speaking to reporters said the actual death count could be higher as some of the families carried out the last rites of the deceased without informing the police.

Since death by consumption of spurious liquor carries a social stigma, some of the families have refrained from registering the complaints, said a police official privy to the case. The victims' kin have been appealed to come forth and help in the police investigation.

As per the probe so far, the spurious liquor was found to be extremely toxic, and remained strong even after being diluted with 10 times more water. The state opposition has demanded Chief Minister Capt Amarinder Singh to call for a CBI probe into the case.

(The above story first appeared on LatestLY on Aug 03, 2020 09:06 PM IST. For more news and updates on politics, world, sports, entertainment and lifestyle, log on to our website latestly.com).