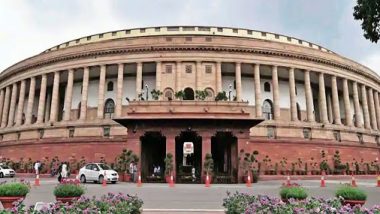 The Bill was moved by Union Health Minister Harsh Vardhan in the absence of Ayush Minister Sripad Naik, who is recovering from Covid-19.

Harsh Vardhan said, "The ministry is giving deemed university status to the institutes in various parts of the country and the matter is referred to the UGC and Education Ministry."

The Minister said that there are 103 institutes of national importance, but there was none in Ayurveda. He said the Jamnagar institute has been chosen because this is one of the oldest institutes of the country founded by the Government of India in 1956.

Many MPs from the TRS, Bodoland People's Front, AIADMK, CPM, BSP and others demanded similar institutes in other states also.

The Chairman, M. Venkiah Naidu, said, "The minister should take into consideration the demand of such institutes in every state."

Congress leader L. Hanumanthiah raised objections during the discussion. He said, "Why Gujarat is given so much importance and Kerala should also be given prominence, which is a pioneer of the Ayurveda."

While Thambidurai AIADMK member supported the Bill, he demanded a National Institute of Siddha in Tamil Nadu.

RJD MP Manoj Jha demanded a regulator for the Ayurvedic medicines so that no misuse takes place. He cited the claims made by Ramdev that he has made medicine for Covid-19.

The Bill seeks three institutes to be merged -- the Institute of Post Graduate Teaching and Research in Ayurveda, Shree Gulabkunverba Ayurved Mahavidyalaya, Jamnagar, and, the Indian Institute of Ayurvedic Pharmaceutical Sciences, all in Jamnagar.

The proposed Institute will be situated in the campus of Gujarat Ayurveda University, Jamnagar.

The Institute will be developed on the patterns of teaching in medical education in Ayurveda and pharmacy, bring together educational facilities for training of personnel in all branches of Ayurveda, and attain self-sufficiency in postgraduate education to meet the need for specialists and medical teachers in Ayurveda, also make an in-depth study and research in the field of Ayurveda.

(The above story first appeared on LatestLY on Sep 16, 2020 01:08 PM IST. For more news and updates on politics, world, sports, entertainment and lifestyle, log on to our website latestly.com).