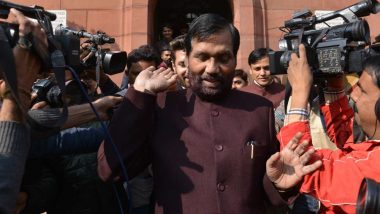 New Delhi, September 21: Union Minister of Consumer Affairs, Food and Public Distribution Ram Vilas Paswan is in the intensive care unit, his son Chirag Paswan has said. In his letter to members of the Lok Janshakti Party (LJP), Chirag Paswan said since his father Ram Vilas Paswan is in ICU, he won't be able to leave Delhi and visit Bihar where assembly elections will take place before November 29 this year.

Paswan has been admitted to Fortis Escort Hospital in Delhi since August 23. He was hospitalised after he went for a routine checkup. The LJP founder is already suffering from kidney and heart problems and has been undergoing treatment for a long time. In his absence, Chirag, who has been named as president of the LJP, is handing the party's affairs. Recently, Paswan said that he agrees with every decision of his son.

Paswan is one of the senior most ministers in the Modi government. Last year, he handed over the command of the party to Chirag. Paswan has been very active in implementing the free grain distribution scheme run by his ministry during the Corona period.

(The above story first appeared on LatestLY on Sep 21, 2020 09:24 AM IST. For more news and updates on politics, world, sports, entertainment and lifestyle, log on to our website latestly.com).