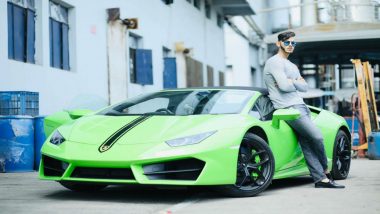 Sanskar Daryani is an Avid Car Reviewer and Influencer from Indore, Madhya Pradesh, one of the top reviewers in all of India and being a car enthusiast he video blogs about the super cars he owns.

His Instagram profile gets phenomenal traffic and his fans online absolutely love and support his reviews on cars & fashion and the content he has produced around his Super cars. Being the Youngest Car reviewer, has generated content around the most prestigious sports cars ever created: Lamborghini & Porsche.

What’s really great about this story though, is that Sanskar started out just like you and me. He was sure what he wants to talk about through his social media and knowing that it would stick. The car videos got the traffic he desired and slowly built his Instagram presence off the back of his own content. Slowly, he also pursed lifestyle blogging, which his fans are very supportive of and love seeing him doing poses.

His Instagram presence became a true success when he went viral for doing sit-ups during Lockdown for driving his Porsche without a mask. Sanskar Daryani has to be one of the luckiest people in the world, living out a passion every single day and earning appreciation from his fans doing the right thing.

Since then Sanskar have gone from strength to strength. He’s had more people following him dedicatedly. There’s also new branches of the blogging he;s opening up like fashion, modelling etc.

He’s truly become a massive influencer, which all started as an after-hours experiment to see if he could build content around his favourite cars.

In his interview he stated, ‘I do my best to keep the quality as high as possible. The strategy I use is to understand the needs of my viewers and try design our videos in such a way that they are interesting to watch and answer their queries and take them on a virtual car ride. Our videos are not created to showcase our capabilities, rather they are to help answer queries of our viewers.’

As a Young Entrepreneur he not only curates content but also likes to give back to the community. During the pandemic he was actively carrying out food distribution for the people in need. He took it to himself for distributing food for as many people as possible. He was also actively distributing face masks and sanitisers, so that no person would become a target of this deadly disease during these unfortunate days.

Sanskar plans onto create content that not only reaches the right audience but also work in a way where he can create more opportunities for himself and his followers. He is planning to create a social media contest, where the contest winner will get to live his dream for a day. He kept the contest details secret, but shh..we are waiting for you to open up more about it so we can participate too!