Shabnam Rani's brother-in-law and his friends are suspected to be behind the acid attack. 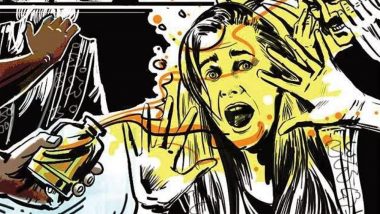 Lucknow, Sep 14: Shabnam Rani, a victim of triple talaq who filed a petition against nikah halala, was attacked with acid in Uttar Pradesh's Bulandshahr on Thursday. Shabnam Rani's brother-in-law and his friends are suspected to be behind the acid attack. She had alleged that her husband gave her triple talaq and forced her to undergo nikah halala.

An unspecified number of persons threw acid on Shabnam when she was on her way to register a complaint with the SSP after being allegedly assaulted by her in-laws a day earlier. She was rushed to a local hospital where her condition is said to be stable. Shabnam, a native of Delhi, was married off to Bulandshahr 12 years ago. Nikah Halala Horror in Uttar Pradesh: Divorced Woman Forced to Sleep With Father-in-law Who Raped Her.

Shabnam filed a petition against nikah halala and polygamy, alleging that her husband had given her triple talaq one and a half years after their marriage. She had further alleged her husband her to perform nikah halala with her brother-in-law, after which she approached the apex court against the controversial Islamic practices.

Polygamy is a practice followed in Muslim community where men are allowed to have multiple wives. Under nikah halala, if a Muslim woman after being divorced by her husband three times at different instances wants to go back to him, then she has to marry another person and then divorce the second husband to get re-married to her first husband.

(The above story first appeared on LatestLY on Sep 14, 2018 10:03 AM IST. For more news and updates on politics, world, sports, entertainment and lifestyle, log on to our website latestly.com).