Reacting to allegations surrounding the death of a civilian in Jammu and Kashmir's Sopore on Wednesday, the CRPF denied that he was killed in firing by the security forces. 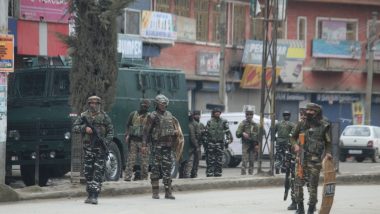 Srinagar, July 2: Reacting to allegations surrounding the death of a civilian in Jammu and Kashmir's Sopore on Wednesday, the Central Reserve Police Force (CRPF) denied that he was killed in firing by the security forces. Describing the incident as "unfortunate", Zulfiquar Hasan, CRPF ADG of Jammu and Kashmir Zone, said reports alleging that security forces took the man out of his car and killed him are baseless. Sopore Terror Attack: Jammu and Kashmir Police Rescues and Consoles 3-Year-Old Boy Who Was Sitting Near Dead Body of Grandfather.

"It was an unfortunate incident. I think some people have tried to give it a spin by saying that CRPF took him (a civilian) out of the vehicle and shot him. It's totally untrue," Zulfiquar Hasan told reporters on Thursday. Videos of the slain civilian's son and daughter alleging that their father was killed by the CRPF went viral on social media. Earlier, Jammu and Kashmir also denied that the civilian was killed by security forces. Jammu and Kashmir: 3 Including 2 CRPF Personnel Injured in Terrorist Attack in Sopore Town of Baramulla District.

#WATCH — It was an unfortunate incident.I think some ppl have tried to give it a spin by saying that CRPF took him (a civilian) out of the vehicle&shot him. It's totally untrue:Zulfiqar Hasan,ADG CRPF on death of a civilian during a terror attack in Sopore y'day. #JammuAndKashmir pic.twitter.com/MuKiCdfkP6

Detailing the sequence of events to the media, IGP Kashmir Vijay Kumar said two LeT militants fired at the CRPF 'naka' party from a mosque at Model Town in Sopore, in which a CRPF Head Constable and the civilian were killed. The security forces didn't fire a single shot during the incident, he claimed. The attack was carried out by Lashkar-e-Toiba militants - Usman Bhai, a foreigner, and Adil, a local, he added.

"When CRPF men were deboarding from the vehicle to be part of the joint 'naka' party at Model Town, two militants hiding in the mosque started firing. One CRPF trooper was killed and three others injured. A civilian, hit by bullets, died later," he was quoted as saying. The civilian died in front of his minor grandson. The heartbreaking pictures that surfaced showed the toddler sitting on the dead body.

(The above story first appeared on LatestLY on Jul 02, 2020 09:24 AM IST. For more news and updates on politics, world, sports, entertainment and lifestyle, log on to our website latestly.com).