The Colonel and 19 other Indian soldiers of the 16 Bihar Regiment were killed in the clashes with Chinese troops in Galwan Valley on June 15 last year. He is survived by his wife Santoshi, nine-year-old daughter Abhigna and four-year-old son Anirudh. 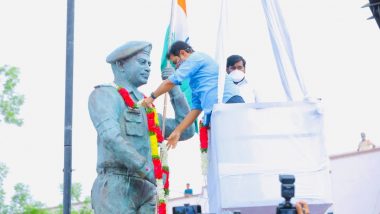 Hyderabad, June 15: A statue of Colonel B. Santosh Babu, who was martyred in the bloody clash with the Chinese People's Liberation Army (PLA) in the Galwan Valley in eastern Lakadakh on June 15 last year, was unveiled in Telangana's Suryapet town on Tuesday.

State Minister for Municipal Administration and Urban Development, K.T. Rama Rao, along with Energy Minister, G. Jagdish Reddy, unveiled the statue on the Court Chowrasta in Suryapet on Tuesday. Santosh's parents, wife and other family members were also present at the ceremony held to mark his first death anniversary.

The ministers paid tributes to the late Colonel by garlanding his statue. The authorities also declared that the Court Chowrasta will henceforth be called Colonel Santosh Babu Chowrasta. Galwan Valley Clash: 'Patiently Waited for a Year on Galwan but No Clarity', Says Congress Interim President Sonia Gandhi.

The Colonel and 19 other Indian soldiers of the 16 Bihar Regiment were killed in the clashes with Chinese troops in Galwan Valley on June 15 last year. He is survived by his wife Santoshi, nine-year-old daughter Abhigna and four-year-old son Anirudh.

Santosh, who was the Commanding Officer of 16 Bihar Regiment, had been serving on Indo-China border for the last one-and-a-half years, and his family was looking forward to his transfer to Hyderabad. Indian Army Pays Tributes to Soldiers Martyred in Galwan Valley Clash.

An alumni of Sainik School Korukonda and National Defence Academy, Santosh got commissioned into the Bihar Regiment from the Indian Military Academy in Dehradun and went on to complete the prestigious Defence Service Staff Course from Wellington before taking over the command of his Battalion.

On the eve of Republic Day this year, the government of India had posthumously awarded the Mahavir Chakra, the second highest wartime gallantry medal, to the Colonel.

(The above story first appeared on LatestLY on Jun 15, 2021 10:58 PM IST. For more news and updates on politics, world, sports, entertainment and lifestyle, log on to our website latestly.com).