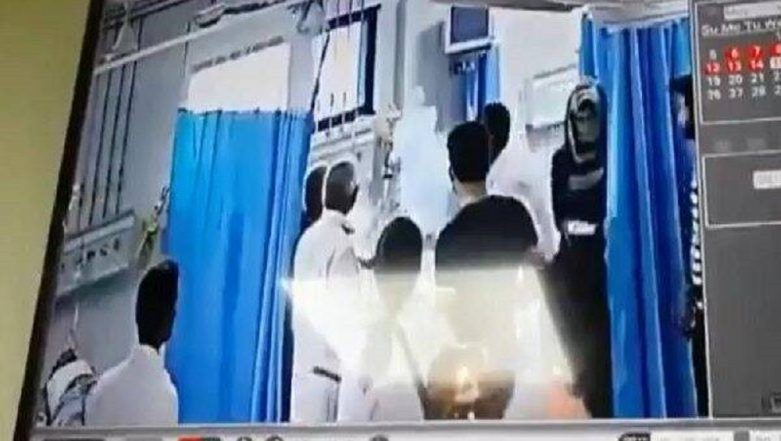 Aligarh, May 16: In a bizarre incident, a woman died in Uttar Pradesh's Aligarh after an explosion in her mouth at a local hospital. The incident took place while she was being given treatment at the hospital. According to reports, the woman was rushed to the J.N. Medical College in Aligarh on Wednesday evening after she allegedly consumed poison. Uttar Pradesh Shocker: Woman in Bahraich Forced to Deliver Stillborn Baby on Hospital Floor After Staff Fails to Attend Her on Time.

As soon as the doctors began treatment and put the suction pipe in the mouth, an explosion took place which was recorded in the CCTV cameras. A team of doctors said that the woman, in all probability, had consumed sulphuric acid which after coming in contact with oxygen through the suction pipe exploded. Deeper research into the incident will reveal the exact cause, said the hospital spokesman. Uttar Pradesh: Neglected by Hospitals, Woman Delivers Baby Roadside in Shravasti District.

The woman was identified as Sheela Devi. According to reports, the woman was admitted to the hospital by the police. “Some explosion occurred in her mouth and flames along with smoke came out while the team of medicos were trying to suck out the poison from her stomach,” reported The Times of India quoting Chief medical officer of JNMC, SS Zaidi as saying. He further added that it was the first time that such an incident took place in medical history.