Uttar Pradesh BJP president Swatantra Dev Singh has said the Lakhimpur Kheri incident will not have any fallout on BJP's electoral prospects in any part of the state in the Assembly polls scheduled in 2022. 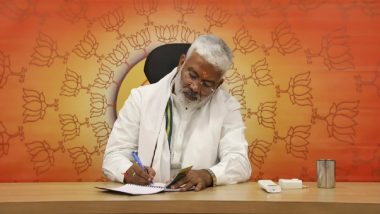 Lucknow, October 15: Uttar Pradesh BJP president Swatantra Dev Singh has said the Lakhimpur Kheri incident will not have any fallout on BJP's electoral prospects in any part of the state in the Assembly polls scheduled in 2022. "The Opposition has been viciously trying to turn a crisis into a political opportunity, but it will not succeed in denting the BJP's image. The opposition can spoil the atmosphere of the state, but cannot damage the BJP. The state government has acted promptly and swiftly in dealing with the situation," he told reporters. Lakhimpur Kheri Violence Case: SIT Recreates Crime Scene With Ashish Mishra and 3 Accused.

Singh said various 'pro-farmer' policies framed by the Modi government and the Yogi Adityanath government have benefitted the farming community in the state and brought it close to the ruling party. Party sources said the BJP had already launched a damage control exercise on the issue and its cadres have been asked to explain the situation at the booth level. Lakhimpur Kheri Violence: Farmers Will Hold 'Rail Roko' Protest on October 18 if Union Minister Ajay Mishra Is Not Sacked, Says Rakesh Tikait.

"The aggression of the opposition on the Lakhimpur incident was merely for political gains since elections are round the corner. Even a party like the Congress which has negligible presence in the state tried to hog the limelight. Such tricks will not work in elections," said a senior party functionary.

State BJP Kisan Morcha president Kameshwar Singh said that functionaries of the frontal wings are in constant touch with farmers, telling them about various measures taken by the Centre and state government. He also said the Kisan Morcha was devising campaigns and programmes to consolidate farmers, which would be launched soon.

(The above story first appeared on LatestLY on Oct 15, 2021 01:14 PM IST. For more news and updates on politics, world, sports, entertainment and lifestyle, log on to our website latestly.com).