Dairy farmers of six more villages in Amroha district have stopped supply of milk to the cooperative societies to express their solidarity with the farmers movement. 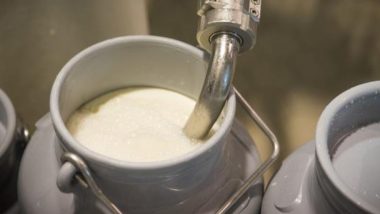 Amroha, March 5: Dairy farmers of six more villages in Amroha district have stopped supply of milk to the cooperative societies to express their solidarity with the farmers movement.

Earlier, three other villages in the district had announced a boycott of milk supply till the three contentious farm laws passed in September 2020 were withdrawn by the Centre.

The villagers have also announced that from March 6, they will sell milk at Rs 100 per litre. At present, their supply is sold between Rs 25 and Rs 35 per litre. Maharashtra Govt To Stop Disconnecting Power to Defaulting Farmers and Other Consumers, Says Deputy CM Ajit Pawar.

The villagers have started extracting ghee from the milk so as to increase the shelf life of the product.

Dairy farmers of these nine villages are also demanding a law on guarantee of payment and minimum support price for crops.

Apart from cooperatives, several private dairies have also not received any milk for the past few days in the district.

Dinesh Kumar, who owns a private dairy, said, "I have been running a dairy in my village for the past six or seven years and farmers usually supply milk to me. But for the last four days, they have stopped milk supply. The farmers have not allowed our vehicles to enter their villages. What can we do when farmers are united in not supplying milk?"

Rajpura Singh, another dairy farmer, said, "We have around 20 cattle which produce at least 100 litres of milk a day. We sell it to the milkman. But for the last three days, we have not sold a single drop of milk.

"The government is not thinking about the welfare of farmers and cattle owners. While the price of petrol, diesel, cooking gas, fertilizers and power tariff have gone up, milk prices have not been increased.

"The cost of milk production is over Rs 40 per litre while we get only Rs 30 or Rs 35 for a litre of milk. We sell our produce at throwaway prices but have to buy other products from the market at high prices. In such a condition, how will farmers survive?"

Earlier, on March 2, dairy farmers in three villages in Amroha district had stopped supply of milk to the cooperative societies to express their solidarity with the farmers' movement.

State president of Bharatiya Kisan Union (BKU) youth wing, Digambar Singh, said, "We have not invoked the farmers to stop the milk sale.

"Farmers are doing so of their own to protest against farm law. Agitation is not confined to us, it has reached ground level and is now getting support from other farmers and common man too."

(The above story first appeared on LatestLY on Mar 05, 2021 12:15 PM IST. For more news and updates on politics, world, sports, entertainment and lifestyle, log on to our website latestly.com).