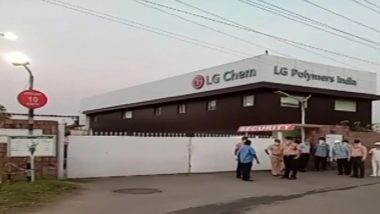 Visakhapatnam, May 7: The Andhra Pradesh police on Thursday dismissed reports of second gas leak incident at LG Polymers Industry in Visakhapatnam. During the wee hours today, an incident of gas leak was reported at LG Polymers Industry after which around 800 people were rushed to hospitals. Hours later, reports arrived that another gas leakage was reported at the chemical factory. Vizag Gas Leak: PM Narendra Modi Says Situation is Being Closely Monitored, Prays For 'Everyone's Safety & Well-Being in Visakhapatnam'.

The state police then clarified and tweeted: "Reports of a second leak at #LGPolymers premises are false. Maintenance team was repairing the system and some vapour was let out. There is NO second leak (sic)." At least ten people died after styrene gas leaked at LG Polymers Industry in RR Venkatapuram village. The gas leakage was reported around 3:30 am, which led to panic in surrounding areas. Styrene Gas Leak in Vizag: What Is Styrene? What Is Its Effect on Human Health? Know All About This Poisonous Gas.

Reports of a second leak at #LGPolymers premises are false. Maintenance team was repairing the system and some vapour was let out. There is NO second leak.

Subsequently, nearby areas were evacuated. Those who fell sick complained of breathing difficulties, and burning sensation in the eyes. "Right now gas has been neutralised. One of the antidotes is drinking a lot of water. An investigation will be carried out to see how this happened," Andhra Pradesh Director General of Police, Gautam Sawang told news agency ANI. He added that of the 246 people currently receiving treatment, 20 are on ventilators.

Following the incident, Chief Minister Jagan Mohan Reddy directed the district officials to take every possible step to save lives and bring the situation under control. Prime Minister Narendra Modi also called Jagan and assured all help from the Centre. LG Polymers, is among India's leading manufacturer of polystyrene and expandable polystyrene. The plant located at Visakhapatnam, belongs to the Mumbai-based LG Polymers India, which is part of the South Korean group LG Chemical.

According to Greater Visakhapatnam Municipal Corporation officials, the tragedy took place when the chemical unit, closed due to the lockdown, was being restarted on Thursday morning. The gas stored in tanks began leaking and spread in a radius of 3 km, reported news agency IANS.

(The above story first appeared on LatestLY on May 07, 2020 02:36 PM IST. For more news and updates on politics, world, sports, entertainment and lifestyle, log on to our website latestly.com).