Styrene Gas Leak in Vizag: What Is Styrene? What Is Its Effect on Human Health? Know All About This Poisonous Gas

Health effects of styrene include irritation of the skin, eyes, and the upper respiratory tract. Acute exposure may also result in gastrointestinal effects. The gas can also lead to Immediately Dangerous to Life or Health (IDLH) document that includes acute toxicity data for styrene. 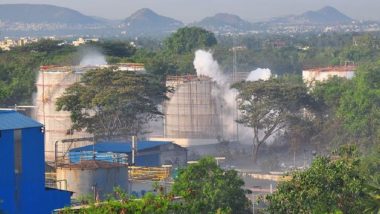 Visakhapatnam, May 7: As many as 11 people have been killed so far and more than a hundred have been rushed to hospital after a poisonous gas leak from a chemical plant in Andhra Pradesh's Visakhapatnam on Thursday morning. The accidental leakage of styrene gas was reported from Korean company LG Polymers’ plant at Venkatapuram village in Visakhapatnam. Fear and panic gripped the village after people complained of burning sensation in eyes and breathing difficulties as the strong stench of the gas enveloped the entire region. Vizag Gas Leak: Here's What We Know So Far.

According to district administration, the neuro-toxic gas Styrene leaked from a chemical plant of LG Polymers at around 3 am today in R R Venkatapuram.  Visakhapatnam City CP, RK Meena stated that the maximum impact of the gas leak was in about 1-1.5 km but the smell spread to about 2-2.5 km. The official informed that 100-120 people have been shifted to hospitals. Meanwhile, police official Swaroop Rani in Visakhapatnam said that the incident happened at a plant operated by LG Polymers and that gas leaked out of two 5,000-tonne tanks that had been unattended due to India's coronavirus lockdown in place since late March. Vizag Gas Leak: CM Jagan Mohan Reddy Announces Rs 1 Cr Compensation to Family of Deceased.

What is Styrene gas

Styrene is a poisonous gas and is a highly flammable liquid which means it ca easily catch fire. It is used to make polystyrene plastics, fiberglass, rubber, and latex. Styrene gas, with chemical formula C6H5CH=CH2, is also known as ethenylbenzene, vinylbenzene, and phenylethene. It is used to make several things including insulation, pipes, automobile parts, food containers, toys, shoes.

Impact of Styrene gas on Humans

Styrene is regarded as a "known carcinogen", especially in case of eye contact, but also in case of skin contact, of ingestion and of inhalation. According to reports, long-term exposure to styrene in humans results in effects on the central nervous system (CNS), such as headache, fatigue, weakness, and depression, CSN dysfunction, hearing loss, and peripheral neuropathy.

The neurotoxic properties of styrene have also been studied and reported effects include effects on vision. Health effects of styrene include irritation of the skin, eyes, and the upper respiratory tract. Acute exposure may also result in gastrointestinal effects. The gas can also lead to Immediately Dangerous to Life or Health (IDLH) document that includes acute toxicity data for styrene.

Styrene is also found in consumer products – cigarettes. Air emissions from styrene-based products include vehicle exhaust, and copy machines. According to several studies on animals, the styrene gas when inhaled can result in changes in the lining of the nose and damage to the liver. However, the effects might be severe in animals as they may be more sensitive than humans to the nose and liver effects.

The incident that took place at a polymers unit, is located in the vicinity of the Naiduthota area near Gopalapatnam. According to several media reports, several villagers fell unconscious on roads while fleeing from the affected areas in the village. More than a 1,000 people in five surrounding villages, in a three km radius, have been reported sick and as many as 1500 people have been evacuated.

The company, LG Polymers, is among India's leading manufacturer of polystyrene and expandable polystyrene.  The plant located at Visakhapatnam, belongs to the Mumbai-based LG Polymers India, which is part of the South Korean group LG Chemical.

(The above story first appeared on LatestLY on May 07, 2020 11:21 AM IST. For more news and updates on politics, world, sports, entertainment and lifestyle, log on to our website latestly.com).