Who is Vini Mahajan, The First Woman Chief Secretary of Punjab? 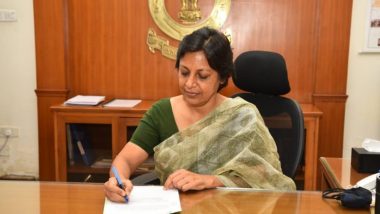 Chandigarh, June 26: The Punjab government on Friday appointed 1987-batch Punjab cadre IAS officer Vini Mahajan as the new Chief Secretary. Vini Mahajan took over as the first woman Chief Secretary of Punjab, replacing Karan Avtar Singh who has been posted as Special Chief Secretary of Governance Reforms. She is the only Punjab-cadre officer currently in the state and brings to the table 33 years of experience in a host of key positions in the central and state governments.

Vini is the wife of Dinkar Gupta, who is a 1987-batch Indian Police Service (IPS) officer and serving as Director General of Police in Punjab. This is perhaps the first time any IAS-IPS couple serves simultaneously as the Chief Secretary and the DGP of a state. Punjab: Health Secretary Sacks 22 Lab Technicians Posted in Amritsar District Hospital to End 'VIP Culture'.

Vini Mahajan (@mahajan_vini) takes over as the first woman Chief Secretary of #Punjab, marking another milestone in an illustrious career which is notable for many landmark achievements. pic.twitter.com/ubklTH8OGM

Who is Vini Mahajan?

Prior to taking over as Chief Secretary, Vini was serving as Additional Chief Secretary with the Investment Promotion, Industries and Commerce, Information Technology and Governance Reforms and Public Grievances. She was part of the core team of the central government that put together India's domestic response, during and following the 2008 global financial crisis. She also participated in the global response through the G-20 mechanism. (With agency inputs)

(The above story first appeared on LatestLY on Jun 26, 2020 06:41 PM IST. For more news and updates on politics, world, sports, entertainment and lifestyle, log on to our website latestly.com).