Two people were arrested on Monday for allegedly smuggling 62 rose-ringed parakeets in Delhi. The birds have been released into their natural habitat. 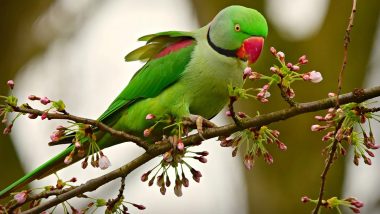 New Delhi, September 15: In an incident of animal smuggling, two men have been arrested and over 60 rose-ringed parakeets have been rescued from them in Delhi's Mandawali area on Monday. Reports inform that two men were spotted carrying the parakeets in bags by the local police. The accused were arrested while the parakeets were released into their natural habitats. Notably, rose-ringed parakeets are protected under schedule -IV of the Wildlife Protection Act, 1972. Both the accused have been booked under relevant sections of the act.

Deputy Conservator of Forest, Central Division, Aditya Madanpotra said “The local police found two men carrying bags full of parakeets in the area on Monday evening. The two men were arrested for smuggling the parakeets in order to sell them at the bird market better known as ‘kabootar market’, mostly indulging in illegal trade, near the Red Fort in Old Delhi. The parakeets were rescued and released in their natural habitat," reported the Hindustan Times. Six-Feet-Long Indian Rat Snake Rescued From ASI Head Office in Agra.

In separate incidents, certain snakes have also been rescued in the national capital over the past two days.  A red sand boa and a common sand boa were rescued from north Delhi’s Indira Colony, Mukherjee Nagar on Monday. An Indian cobra was recused on Tuesday. One more red sand boa snake was rescued from Seelampur in Delhi. All the rescued snakes have been rehabilitated. Rare Two-Headed Cobra Spotted in Dehradun; Rescued by Forest Officials.

The forest official has also appealed to the people to not panic if they see any snake as it could stress the animal making it difficult to rescue them. Hindustan Times quoted him saying “The snake has been rehabilitated. I appeal to people to not panic if they do come across a snake in a public place and ring up the police or the wildlife department. People panicking around stresses the animal and makes it difficult for it to be rescued."

(The above story first appeared on LatestLY on Sep 15, 2021 10:02 AM IST. For more news and updates on politics, world, sports, entertainment and lifestyle, log on to our website latestly.com).