A massive bomb blast occurred near the house of terrorist Hafiz Saeed in Lahore's Johar Town area on Wednesday, in which at least two persons were killed, while 17 others have sustained injuries. 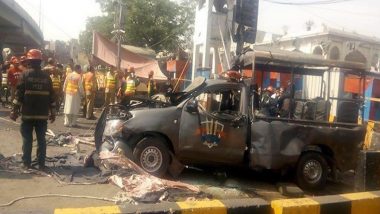 Lahore, June 23: A massive bomb blast occurred near the house of terrorist Hafiz Saeed in Lahore's Johar Town area on Wednesday, in which at least two persons were killed, while 17 others have sustained injuries.

Saeed is wanted in India for the Mumbai terror attack and other terror cases. He is the founder of banned terror groups Lashkar-e-Taiba and Jamat-ud-Dawa and currently lodged in jail.  Pakistan: Atleast 4 Injured in Explosion at Johar Town in Lahore

The house was cordoned through barbed wire and security personnel were deployed permanently to guard it.

Top sources said that one of the policemen deployed for the security of the house was killed in the blast. The second person who died in the blast was a passer-by.

Lahore's Chief City Police Officer Ghulam Mehmood Dogar told media persons that the probe has started into the incident and a team of bomb disposal squad is on the spot.

He had also stated that the Bomb Disposal Squad would share the details about the nature of explosion.

Police and bomb disposal teams have reached the site of the incident. It is found that the glass windows of nearby houses and buildings were shattered.

The people, who sustained injuries, had been rushed to Lahore's Jinnah Hospital in private cars and auto-rickshaws.

The sound of the blast was so loud that it was heard in faraway areas. However, the nature of the blast has not been ascertained yet.

Local police have cordoned off the area for further probe into the matter.

Punjab chief minister Sardar Usman Buzdar has sought report from the Inspector-General of Police about the blast.

The Government of Punjab on Twitter announced that the chief minister has ordered an immediate investigation of the incident.

Saeed, a UN-designated terrorist on whom the US has placed a USD 10 million bounty, was arrested on July 17 last year in the terror financing cases.

(The above story first appeared on LatestLY on Jun 23, 2021 05:44 PM IST. For more news and updates on politics, world, sports, entertainment and lifestyle, log on to our website latestly.com).