The term 'Azad Kashmir' is used as a propaganda measure by Islamabad to justify its occupation over parts of the Valley. 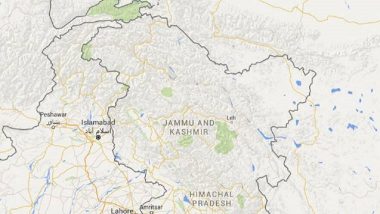 Srinagar, Feb 26: The part of Kashmir illegally occupied by Pakistan, known as PoK or Pakistan-occupied-Kashmir, was referred to as 'Azad Kashmir' in an exam paper prepared by the Jammu & Kashmir Government's Service Selection Recruitment Board (SSRB).

The term 'Azad Kashmir' is used as a propaganda measure by Islamabad to justify its occupation over parts of the Valley. The use of the term in the examination being conducted by the state government was objected to by students in Jammu region.

After the matter was taken up to SSRB chairman Simrandeep Singh, he said an inquiry would be conducted. Facing flak over the faux pas, Singh said the board officials cannot be put completely to blame as the questions are not revealed to them before the exams are conducted.

The controversial question, numbered 86 in the recruitment exam, read as follows:

Jammu and Kashmir has an international border with China in the north and east, and the Line of Control separates it from the Pakistan-controlled territories of Azad Kashmir and Gilgit-Baltistan in:

a) north and north-east respectively

b) south and south-east respectively

Singh said the question will be treated as 'incorrect' and as per the usual procedure, candidates would be compensated the marks for it. He, however, ruled out the possibility of a re-exam due to the erroneous question.

(The above story first appeared on LatestLY on Feb 26, 2018 11:24 AM IST. For more news and updates on politics, world, sports, entertainment and lifestyle, log on to our website latestly.com).