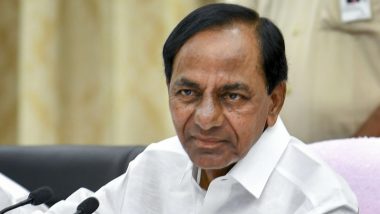 Hyderabad, September 19: Alleging that the agriculture bills brought in by the NDA government would cause great injustice to farmers in the country, TRS president and Telangana Chief Minister K Chandrasekhar Rao on Saturday asked his party MPs to vote against them in the Rajya Sabha.Observing that the bills would hurt farmers and benefit corporates, Rao told the TRS parliamentary party leader K Keshav Rao to strongly oppose them in parliament. Farm Bills: What Are The 3 Legislations Brought by Modi Government? Why Are Farmers Protesting? All You Need to Know.

"Chief Minister Sri K Chandrasekhar Rao said that the Farmers and farming related Bills introduced by the Centre in Parliament would do a lot of injustices to the farm sector in the country.

The CM has instructed TRSPP Leader Dr K Keshav Rao to oppose the Bills tooth and nail in the Parliament, as it would benefit the Corporates and adversely impact the farmers, an official release said.

Though the NDA government says that the farmers can sell their produce anywhere in the country, is it possible for farmers to take their small produce to other places, bearing heavy transport charges, he asked.

"These Bills are nothing but a sugar coated pill. This should be opposed at all costs," the CM said.

Rao further said, as on date, there is 50 per cent import duty on corn and that the Centre has decided to reduce it by 15 per cent.

"For whose benefit 35 per cent of import duty was reduced? When the country is going through economic crisis how did they take such a decision? corn is cultivated in a big way in the country. If we reduce the import duty on corn, what will happen to our own corn producers?," he asked.

Rao said the bills "should be opposed and voted against in the Rajya Sabha" since they would cause huge losses to the agriculture sector and are against the interests of farmers in the country. The three agri bills were passed by Lok Sabha this week. TRS has seven members in the Rajya Sabha.