A video viral on Tuesday, in which few men have been seen vandalizing the Amma canteen in Chennai. Both the party workers have been suspended by DMK. 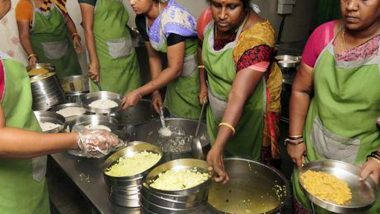 The AIADMK tweeted a video of three men and a boy removing banners kept at the Amma Canteen - the subsidized canteen launched by the AIADMK government where idli is priced at Re 1 and plate of sambar rice is priced at Rs 5. Tamil Nadu Assembly Election Results 2021: Change of Guard All Set To Take Place After 10 Years As DMK-Led Alliance Coasts Towards Emphatic Victory.

The AIADMK also alleged that the workers at the canteen were assaulted.

Three women were also seen in the video standing silently at the happenings.

The AIADMK led alliance had campaigned that law and order will be a casualty if DMK comes to power and there will be land grabbing and other issues. Two years back DMK men had assaulted officials at a restaurant here for not serving them biryani free. Later Stalin visited the outlet and consoled the staff there.

Condemning the DMK men's act at the Amma Canteen, AMMK leader T.T.V.Dhinakaran said it is painful to see such things happening at an outlet where poor people eat. He also said the DMK men have started their unlawful acts even before the party has assumed power in the state and it is worrisome as to what kind of acts they would indulge in next. PMK Founder S.Ramadoss condemning the act also demanded action against the persons involved in that.

(The above story first appeared on LatestLY on May 04, 2021 05:14 PM IST. For more news and updates on politics, world, sports, entertainment and lifestyle, log on to our website latestly.com).