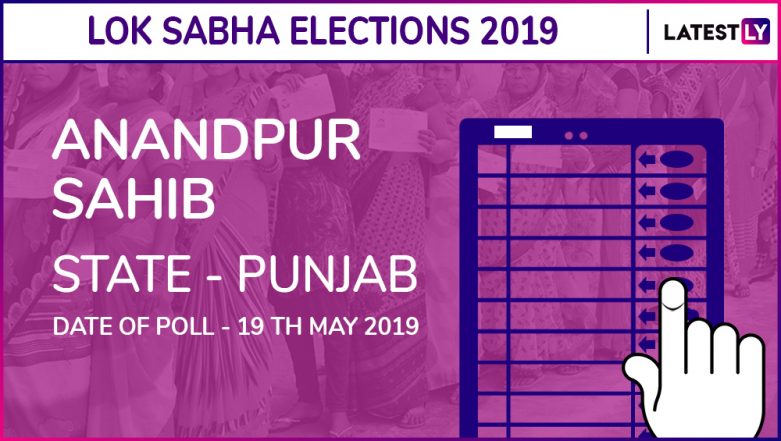 The results of the Anandpur SahibLok Sabha Constituency was declared on May 23. Congress' Manish Tewari won the elections defeating Shiromani Akali Dal (SAD) candidate Prem Singh Chandumajra. The counting of votes began in the parliamentary seat in Punjab at 8 am on Thursday, May 23. Voting for the Anandpur Sahib seat took place in the seventh and final phase of Lok Sabha Elections 2019. Anandpur Sahib is a key Lok Sabha Constituency of Punjab. The constituency is not reserved for any category, and the seat number of this constituency is 6. This constituency came into existence as a part of the implementation of delimitation of parliamentary and assembly constituencies in 2008. The constituency comprises of nine assembly seats including Banga, Shaheed Bhagat Singh Nagar, Mohali, Roopnagar, Balachaur, Chamkaur Sahib and Kharar. Lok Sabha Elections 2019 Schedule: Voting In 7 Phases From April 11 to May 19, Counting And Results On May 23; Check All Dates For General Elections.

In 2019 elections, Aam Aadmi Party (AAP) fielded Narendra Singh Shergil from this constituency. The Congress fielded Manish Tewari, while the Shiromani Akali Dal (SAD) gave the ticket to Prem Singh Chandumajra. The last date of filing nomination for the seat was April 22. The scrutiny of nominations papers took place on April 30. Meanwhile, the last date of withdrawal of candidature was May 2. Lok Sabha Elections 2019 Phase VII: List of States And Constituencies Voting on May 19.

In 2014 Lok Sabha elections, SAD's Prem Singh Chandumajra had defeated  Soni with a margin over 22,000 votes. Meanwhile, in 2009 elections, Congress' Ravneet Singh Bittu had won from this constituency defeating Chandumajra.

On March 10, the Election Commission of India announced dates for the 2019 Lok Sabha elections. The elections will take place in seven phases, and the results will be declared on May 23. The polls will be held in 1,035,918 polling stations across the country compared to 928,000 set up during the last Lok Sabha election in 2014.