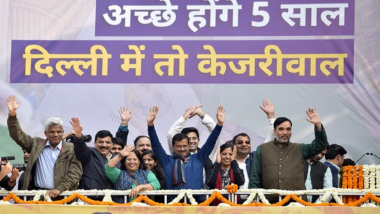 New Delhi, February 11: The Bharatiya Janata Party (BJP)'s high-voltage campaign, powered by the "nationalism" poll plank, was contained by the Aam Aadmi Party (AAP) which kept the goalposts stuck to local issues. As the ruling AAP aimed for, the polls turned out to be a referendum on Chief Minister Arvind Kejriwal's tenure as CM for the last 5 years. Amit Shah Must Apologise For Working as 'Hate Minister', Leading 'Extremist Communal Campaign': CPM After BJP Rout.

After the results were out, Kejriwal issued a retort to the BJP by calling the outcome a "victory of Bharat Mata". Union Home Minister and top BJP leader Amit Shah, during the campaign trail, had described the Delhi poll battle as a contest between "children of Bharat Mata" and the "protesters of Shaheen Bagh".

The pro-incumbency wave of Kejriwal was bolstered by the credible work undertaken by his government in healthcare and education sectors. The Mohalla Clinics set up in all vidhan sabha segments of Delhi housing the low-income group, along with the revamp in government-run schools, raised the popularity of AAP government among the electorate.

A section of the working class was already backing the Kejriwal government for halving the electricity bills and waiving off water charges. Combined with the free bus rides for women passengers in DTC buses, the AAP succeeded in strengthening its "pro-poor" image.

The goodwill earned by AAP through the above measures, though tagged as "populist" by critics, was reflected in the results. The party's vote share was nearabour intact vis-a-vis 2015. from 54.3 percent then, the Kejriwal-led party has succeeded in retaining 53.6 percent of the total votes. The BJP, though increasing its vote share from 32.8 to 38.3 percent, has largely dented the Congress vote share.

In terms of seats, the above voting pattern resulted into 62 out of 70 seats for the AAP, whereas, the BJP was restricted to 8 constituencies. For the AAP, it marked a depreciation by 5 seats as compared to the last assembly polls. For the BJP, a marginal upward movement of 5 seats was registered as compared to the previous elections. The Congress, similar to 2015, ended up drawing a blank.

(The above story first appeared on LatestLY on Feb 11, 2020 11:45 PM IST. For more news and updates on politics, world, sports, entertainment and lifestyle, log on to our website latestly.com).