Union Home Minister Amit Shah on Thursday condemned hate speeches delivered by leaders of the Bharatiya Janata Party (BJP), saying that their statements may have led to BJP's defeat in the Delhi assembly polls. 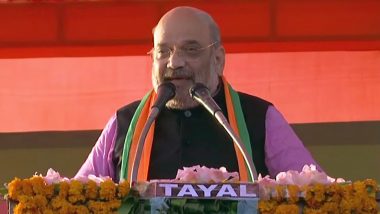 New Delhi, February 13: Union Home Minister Amit Shah on Thursday condemned hate speeches delivered by leaders of the Bharatiya Janata Party (BJP), saying that their statements may have led to BJP's defeat in the Delhi assembly polls. Speaking at an event, Amit Shah also said that his assessment on the Delhi assembly elections went wrong. The Aam Aadmi Party (AAP) returned to power, winning 62 out of 70 seats in the national capital. Why Citizenship Amendment Act+NRC Raise Fear And Concerns: A Multi-Dimensional Take.

"BJP may have suffered because of hate statements made by party leaders," Shah was quoted by PTI as saying. Remarks such as "desh ke gaddaron ko, goli maro..." (shoot the traitor) and "Delhi election is India vs Pakistan match" should not have been made. The BJP distanced itself from such statements," Shah added. Reacting to the outcome of the Delhi polls, the former BJP chief said: "It is a reality that my assessment in Delhi has gone wrong. I have no problem in admitting this." CAB Passage Jolts Northeast: Why Assam and Neighbouring States Are Up in Protest Against Citizenship Amendment Bill.

Shah called the anti-CAA-NRC protest being held at Delhi' Shaheen Bagh "undemocratic", reiterating that the Citizenship Amendment Act has no provision that can take away the citizenship of Muslims. "I want to say to all, discuss protests on CAA but also tell what is the reason for opposition to CAA...If you do a national survey, 20 times more people came out in support of CAA compared to the anti-CAA protesters," Shah said.

Asserting that everyone has a right to protest peacefully, Shah said that act of vandalism in the name of protest won't be tolerated. "Anyone who wants to discuss issues related to CAA with me can seek time from my office; will allot time within three days," the Union Home Minister said.

(The above story first appeared on LatestLY on Feb 13, 2020 06:52 PM IST. For more news and updates on politics, world, sports, entertainment and lifestyle, log on to our website latestly.com).