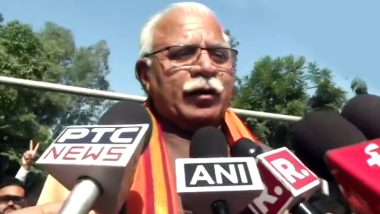 Chandigarh, July 15: Haryana Chief Minister Manohar Lal Khattar on Wednesday reacted to Rajasthan Congress MLAs staying at a hotel in Manesar. He said that anyone can stay at private hotels and also asserted that the Haryana government has no role in the current development. Congress Reacts to Sachin Pilot's 'Not Joining BJP' Remark, Asks Him to 'Come Back to Home in Jaipur'.

"Private hotels are open for everyone, anyone can stay there. The Haryana government has no role in it," Khattar was quoted as saying by news agency ANI. Ashok Gehlot Continues Tirade Against Sachin Pilot, Says 'Speaking Good English' and 'Being Handsome' Not Enough.

Private hotels are open for everyone, anyone can stay there. The Haryana government has no role in it: Haryana CM ML Khattar on being asked about Rajasthan Congress MLAs staying at a hotel in Manesar pic.twitter.com/Nsiqbav0ik

Earlier today, Congress leader Randeep Singh Surjewala asked Sachin Pilot to return back to Jaipur after he refuted claims of joining BJP. "We've seen Sachin Pilot's statement that he won't join BJP. I'd like to tell him that if you don't want that, then immediately come out of the security cover of BJP's Haryana government, stop all conversations with them and come back to your home in Jaipur," the senior Congress leader said.

Pilot was yesterday removed as Rajasthan's deputy chief minister and state party president. The Congress also sacked his two loyalists, Ramesh Meena and Vishvendra Singh, as state ministers. The disciplinary action was taken after they failed to attend the second CLP meet.

(The above story first appeared on LatestLY on Jul 15, 2020 07:08 PM IST. For more news and updates on politics, world, sports, entertainment and lifestyle, log on to our website latestly.com).