HD Deve Gowda, Siddaramaiah Engage in War of Words Over Collapse of JDS-Congress Government in Karnataka 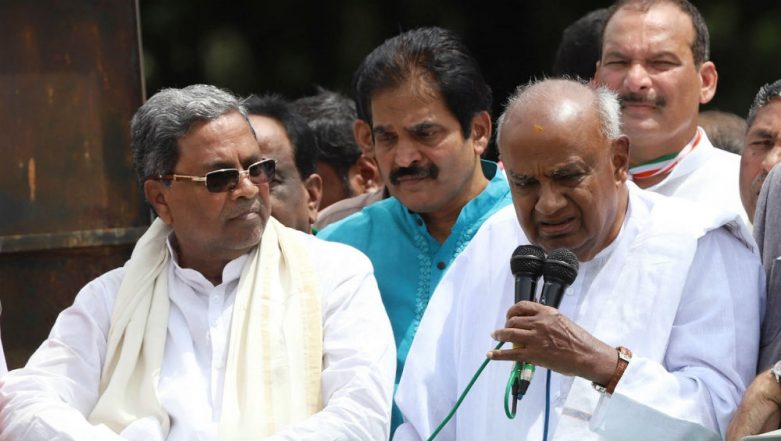 Bengaluru, August 23: A war of words erupted between Janata Dal-Secular supremo HD Deve Gowda and Congress leader Siddaramaiah weeks after the collapse of Congress-JDS coalition government in Karnataka. While HD Deve Gowda put blame on Siddaramaiah, the former Karnataka Chief Minister hit back saying the Gowda family never let anyone else grow. The allegation and counter-allegation widen the rift between JD-S and Congress.

Deve Gowda also said that Sonia Gandhi and Rahul should have consulted Siddaramaiah before supporting HD Kumaraswamy as Chief Minister. "I have clearly said that without taking Mr Siddaramaiah, who was Chief Minister for five years, into confidence Sonia Gandhi and Rahul Gandhi all of a sudden came and said Mr Kumaraswamy is the next Chief Minister, it was their wrong decision," Gowda told reporters on Thursday. Karnataka: People Suffering From Floods But BS Yediyurappa Govt Focusing on Phone Tapping Case, Says HD Deve Gowda.

The former prime minister was referring to his interview to a newspaper in which he had blamed Siddaramiah for the collapse of the government last month. The 14-month-old JDS-Congress coalition government collapsed on July 22 after the confidence motion moved Kumaraswamy was defeated in the assembly. Sixteen MLAs (13 from the Congress and 3 JDS) had resigned as legislators which culminated in the fall of the coalition government.

JD-S leaders hold Siddaramiah responsible for the collapse of the coalition government as most of the rebel Congress MLAs, including ST Somashekar, Byrati Basavaraj, MTB Nagaraj, Munirathna and K Sudhakar, were considered his loyalists. Unfazed by criticism, Siddaramiah on Friday hit back at Deve Gowda and asked why the JD-S failed to transfer their votes for Congress candidates.

"Me and Deve Gowda campaigned in many constituencies. He blamed me for his and his grandson's loss in elections, then he should tell me why our candidates lost. What are the reasons behind it? Did they take any action against those who voted against us?" Siddaramiah asked. Deve Gowda's grandson Nikhil Kumaraswamy lost the Lok Sabha election from Tumkur. Newspaper Editor, Staff Booked For Report on HD Deve Gowda Family After JDS Poor Show in Lok Sabha Elections.

"Deve Gowda never allowed someone else to grow. They don't even let people from their own caste grow. I have friends in all castes and in all parties," Siddaramiah remarked.