Earlier in the day, a life-sized statue of Jayalalithaa was installed by Tamil Nadu Chief Minister Edappadi K. Palaniswami at All India Anna Dravida Munnetra (AIADMK) Headquarters in Chennai. 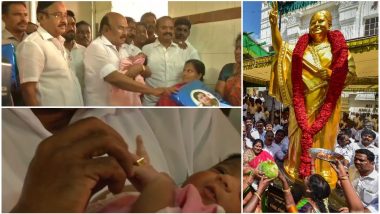 Earlier in the day, a life-sized statue of Jayalalithaa was installed by Tamil Nadu Chief Minister Edappadi K. Palaniswami at All India Anna Dravida Munnetra (AIADMK) Headquarters in Chennai.  “Today we have unveiled the statue of Amma at AIADMK headquarters. Jayalalithaa has given this part to us. When she was alive, she faced a lot of obstacles in her life. We have faced many obstacles as well. We have passed all those hurdles but have come out successful,” said Palaniswami.

It must be noted that the statue has been placed near that of party founder, late Chief Minister M G Ramachandran, known as MGR.

Palaniswami further spoke about the influence of Jayalalithaa over the party and how she had protected every party worker through thick and thin. “We are determined to fulfil Amma's dreams. We are united and no one can separate us,” said EPS. As part of the celebrations, Prime Minister Narendra Modi will be in Chennai today to launch of the AIADMK government’s ambitious scheme of providing 50 per cent subsidy for working women to buy two-wheelers.

As per reports, the ruling party led by Chief Minister Edapaddi K Palaniswami and his deputy, O Panneerselvam, is scheduled to launch its official mouthpiece today.  Titled 'Namathu Amma' (Our Amma-- a reference to Jayalalithaa), on the lines of erstwhile party organ 'Dr Namathu MGR,' the Tamil daily comes in the wake of the party lacking its own media.

Jayalalithaa, lovingly referred as Amma, passed away on December 5, 2016, after suffering from prolonged illness. The death of the iconic personality shattered the All India Anna Dravida Munnetra Kazhagam (AIADMK) into factions.  Jayalalitha was sworn-in as the chief minister of Tamil Nadu for the fifth time on May 23, 2015.

(The above story first appeared on LatestLY on Feb 24, 2018 05:15 PM IST. For more news and updates on politics, world, sports, entertainment and lifestyle, log on to our website latestly.com).