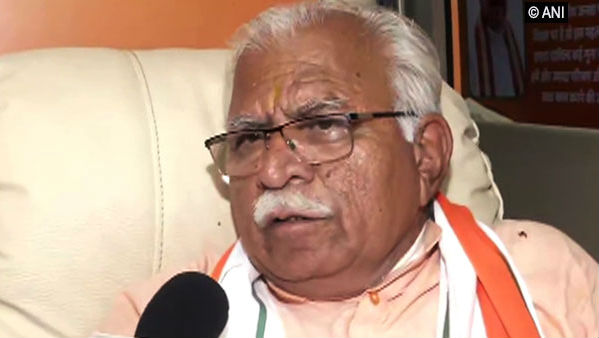 Haryana, September 5: At a time when integration of Kashmir with the rest of the country is dominating even drawing-room discourse, the BJP in Haryana is hoping to gain from the abrogation of Article 370 by the central leadership. Chief Minister of Haryana, Manohar Lal Khattar, in an exclusive interview to ANI on Thursday, said repealing of Article 370 will ensure that Haryana does not have to receive its brave sons in coffins and added that the move has resonated with the people of the state. Jammu & Kashmir Suffering, People 'Held Captive' Even a Month After Article 370 Repeal: Ghulam Nabi Azad.

"Integration of Kashmir will ensure that we do not have to receive our sons, who are fighting for the nation, in coffins. Integration of Kashmir will contain terrorism and we will not lose our sons. We are just 2 per cent of the country's population but our contribution is very high in the defence forces, " Khattar told ANI here. The Haryana Chief Minister is currently busy with mass contact and outreach programme, Jan Ashirwad Yatra, in the poll-bound state.

According to Khattar, the model code of conduct could be implemented in the state between September 10-12. Reiterating his commitment towards the implementation of the National Register of Citizen (NRC), Chief Minister Khattar said that the state needs to execute it to single out the foreign elements in the country.

"It is due to NRC that national citizens and foreigners can be differentiated between. If someone is illegally entering our country, we need to see whether that person can assimilate into our country and culture or not. It is bad for our country if these migrants still have loyalty to their native country," Khattar said. He added that he would not bow down to the demands of the state party leaders to give tickets to their kith and kin by stating, "We are against dynasty politics. We do not believe in the politics of dynasty. There can be an exception if the winnability is a factor. Pakistan Twitter Accounts Suspended Over Kashmir Content.

"While Khattar rubbished the new appointments in Haryana Congress as old news, he claimed that the Dalit-Jat combination will not affect the party. "There are only two castes in the state - those who are poor and those who want to uplift them. Under Prime Minister Narendra Modi's leadership we have risen above caste politics, " he said. The Haryana Chief Minister also added that BJP would easily secure 75 out of the 90 Assembly seats in the state which will to polls later this year.