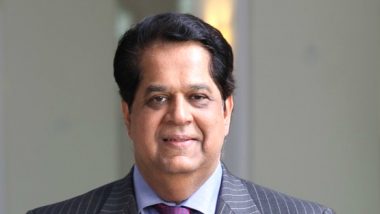 New Delhi, June 1: Political circles and social media are abuzz with rumours that eminent banker Kundapur V Kamath may soon replace Nirmala Sitharaman as Union Finance Minister of India. KV Kamath's recent exit as the president of the National Development Bank led by the five BRICS member countries has added fuel to speculations. There has been no word from the government or the ruling Bharatiya Janata Party (BJP) whether Kamath is being considered for the Finance Minister's post. 'Nirmala Sitharaman Incompetent, Her Job Not to Tell Nation What to Eat': Rahul Gandhi Furthers Tirade Against FM Over Onion Remark.

Rumours about Kamath's induction into the Modi government have been doing rounds since past one week. "A little birdie tells me that “cometh” the hour in North Block," Congress lawmaker Karti Chidambaram tweeted on May 30. The North Block building at Raisina Hill houses the office of the Ministry of Finance. Similar reports had emerged in January this year after Sitharaman missed a meeting between Prime Minister Narendra Modi and businessmen and industry leaders. Nirmala Sitharaman Hits Back at Congress' 'Unfit Economy' Barb, Recalls UPA Era of 'Double Digit Inflation'.

Social Media Abuzz With Reports That KV Kamath Will Take Over as Finance Minister:

@tehseenp Heard On Street : There are strong rumours that KV Kamath is being tipped to be next FM. He has demitted office of BRICS bank and had a meeting with Modi.

So NS may be on her way out.

They are replacing Finance Minister .. rumors on street.

Is he returning to be FM?https://t.co/wvwcpNZpAA

There are *strong rumours* that KV Kamath is being tipped to be next FM. He has demitted office of BRICS bank and had a meeting with Modi.

So NS may be on her way out.

Who is KV Kamath?

KV Kamath, 72, has been associated with the banking industry for a long time. He is a former non-executive chairman of ICICI Bank beside chairman of the IT bellwether Infosys before joining the NDB. He is credited to have built the multilateral lending institution from the scratch. He demitted office on as the president of the National Development Bank after completing his five-year tenure.

(The above story first appeared on LatestLY on Jun 01, 2020 01:50 PM IST. For more news and updates on politics, world, sports, entertainment and lifestyle, log on to our website latestly.com).