Amid the crisis in the Lok Janshakti Party (LJP), a five member delegation led by Chirag Paswan, son of party founder and former Union Minister late Ram Vilas Paswan, approached the Election Commission claiming that he was elected as party chief in 2019 for a period of five years. 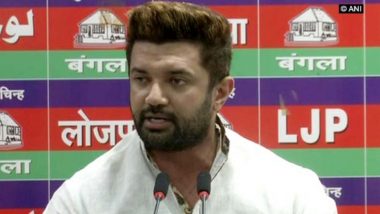 New Delhi, June 18: Amid the crisis in the Lok Janshakti Party (LJP), a five member delegation led by Chirag Paswan, son of party founder and former Union Minister late Ram Vilas Paswan, approached the Election Commission claiming that he was elected as party chief in 2019 for a period of five years.

Speaking to the media after meeting the Election Commission, Chirag said, "A five member delegation met the Commission and kept the matter before it."

He said that they apprised the Election Commission that in 2019 he was elected the national president of the LJP and the national executive has passed the resolution for the same.

Chirag said, "I was elected as LJP President for a period of five years and after every five years election for the party chief is held."

Before me, the party founder Ram Vilas Paswan was the party President and his tenure was till 2020, but due to his health issues he stepped down from the post as he was also having responsibilities as an Union Minister, he said. "Thus he resigned from the post and the national executive gave me the charge of party chief," Chirag said, adding that he apprised the poll panel about the same.

Chirag said that we have apprised the Commission that 10 people, including five MPs have been suspended from the party.

He said that we also informed the poll panel that these people are trying to claim to be the LJP and are using the symbol of the party. "And as Pashupati Kumar Paras is claiming to be the President of the party, thus it was necessary for us to present out side with the poll panel and apprise them of the entire situation."

He said that the poll panel has assured him of informing him if someone claims to be from the LJP.

He added that he approached the EC because the Lok Sabha Speaker acted without consulting the party president.

Chirag said that the party will provide all evidence, documents and affidavits to the poll panel whenever required.

Chirag was removed as leader of the LJP in the Lok Sabha on Monday after five put of six MPs, including his uncle Paras, staged a coup against him.

He was also removed as party chief on Tuesday. Following his removal, Chirag called a national executive meet and sacked five MPs from the party for anti-party activities.

While addressing a press conference on Wednesday Chirag asserted that he was ready for a long legal fight as he is a Sher ka bacha (son of a lion). Chirag had also described the selection of Paras as party chief illegal.

(The above story first appeared on LatestLY on Jun 18, 2021 07:39 PM IST. For more news and updates on politics, world, sports, entertainment and lifestyle, log on to our website latestly.com).