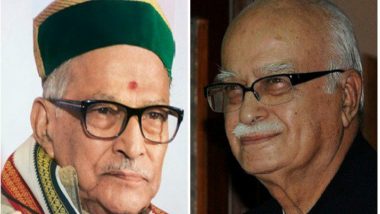 New Delhi, April 8: Bharatiya Janata Party (BJP) president Amit Shah is expected to meet the veteran party leaders Lal Krishna Advani and Murli Manohar Joshi before the party launches its manifesto for ensuing Lok Sabha Elections starting on Thursday, April 11, said NDTV sources. According to reports, the meeting is aimed to bring the tallest leaders on board as the opposition parties are targeting Shah and Prime Minister Narendra Modi for sidelining the veterans.

The founding members of BJP, Advani and Joshi are reportedly unhappy with the party. When the ruling party announced that Amit Shah would contest from Gandhinagar in Gujarat, replacing Advani, the leader didn't go to the public for weeks but delivered a blog post last week. While Manohar Joshi sent out a public message in Kanpur, to his constituency, that he has been told by the saffron party he would not contest polls in the election. BJP to Launch Its Election Manifesto 'Sankalp Patra' on Monday.

Meanwhile, the BJP will release its manifesto today, with national security and development set to be its key highlights. PM Narendra Modi and Amit Shah among other leaders will launch the party's manifesto, described as "Sankalp Patra." On Sunday, Union Minister Arun Jaitley unveiled campaign themes, with “Phir Ek Baar, Modi sarkar (Modi government, once more)” as the tag line.

With the Indian National Congress (INC) party in its manifesto gave major importance to welfare benefits, including a promise of giving Rs 72,000 to the 20 per cent poorest population in India, the BJP is likely to woo different sections of society, especially youth, women and farmers.

(The above story first appeared on LatestLY on Apr 08, 2019 10:48 AM IST. For more news and updates on politics, world, sports, entertainment and lifestyle, log on to our website latestly.com).