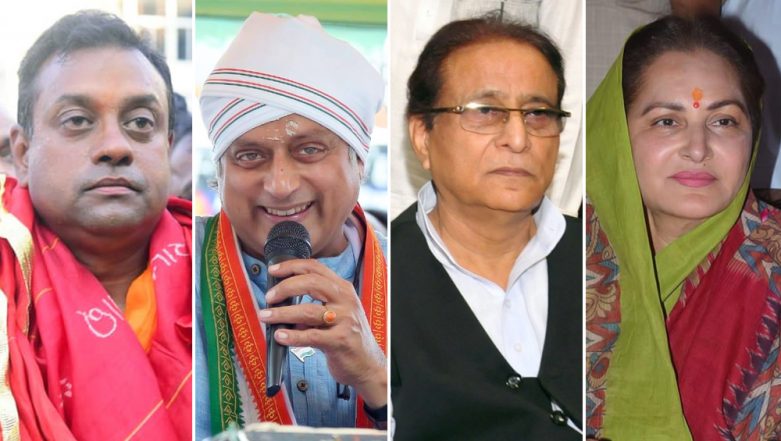 New Delhi, April 22: The third phase of the seven-phased Lok Sabha Elections 2019 is scheduled to take place on April 23. After controversies took place in the first and second phase of 2019 General Elections, the Election Commission (EC) would be hoping of violence-free Phase-3 elections. After the completion of Phase 1 and 2 on April 11 and 18 respectively, the EC would be hoping for a smooth passage on Tuesday.

A lot of political parties will be in fray in the third phase of Lok Sabha Election 2019. The main political entities who’ll have major stake will be Bharatiya Janata Party (BJP), Indian National Congress (INC), Communist Party of India (CPI-M), Shiv Sena, Samajwadi Party (SP), People’s Democratic Party (PDP), Trinamool Congress (AITC) among others. Lok Sabha Elections 2019 Third Round: Which Constituencies Will Go To Polls in Phase 3? List of States And Names of Seats to Vote on April 23.

A slew of star politicians will also have their fate sealed in the third phase of voting, be it Congress President Rahul Gandhi (Wayanad, Kerala), BJP President Amit Shah (Gandhinagar, Gujarat), SP’s Mulayam Singh Yadav (Mainpuri, Uttar Pradesh), among others.

There are quite a few seats where there’s a three-corner or a four-way fight too. As the time races to the third phase polling on April 23, we bring you a list of three key (poll) battles that’ll take place on Tuesday. Lok Sabha Elections 2019 Schedule.

The constituency of Puri will see a three-corner fight amongst sitting MP Pinaki Misra of Biju Janata Dal (BJD), Sambit Patra of BJP, and Satya Prakash Nayak of Congress.

In 2014 Lok Sabha Elections, it was Pinaki Misra who defeated Congress’ Sucharita Mohanty by a margin of over 250,000 votes. BJP’s Ashok Sahu was placed third with a vote share of 20.76%.

In Puri, the Congress has been the most successful party of all times as it has won 6 elections since 1952. However, the BJD candidates have won the parliamentary constituency for five consecutive terms. It’ll be interesting to see if BJD retains the seat or will Congress or BJP spring a surprise!

The constituency of Thiruvananthapuram will witness a three-corner fight, too, amongst sitting MP Shashi Tharoor of Congress, Kummanam Rajasekaran of BJP’, and C. Divakaran of CPI-M.

In 2014 General Elections, it was Shashi Tharoor who nearly escaped with a win after winning the election with a slender margin of 15,000 votes over BJP’s O. Rajagopal. CPI-M’s Bennet Abraham was placed third with a 28.50% vote share.

Rampur has been a bastion for Congress’ party for quite a long time as it has won 10 out of 16 elections here. However, Jaya Prada is a two-time MP from Rampur when she was in Samajwadi Party. Given how the political dynamics have changed in the constituency in recent times, it’ll be exciting to see which party emerges as the winner from Rampur.

A total of 116 seats are going to vote on April 23 – the most number of seats to be contested in a Lok Sabha Polls’ phase. In 2014 Lok Sabha Elections, the BJP had won 62 seats out of these 116; whereas, the Congress party managed to win 16 seats.

The third phase 2019 Lok Sabha Elections are scheduled to take place on April 23 – a month exact before the results are declared on May 23. Stay tuned to LatestLY to know all the latest news and updates about General Elections 2019.