The Hapur Satta Bazar predict a major loss for the BJP in Uttar Pradesh where it had bagged 71 of the 80 Lok Sabha seats. 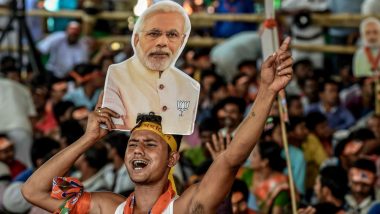 New Delhi, April 25: The Bharatiya Janata Party (BJP) led National Democratic Alliance will form the next government, according to Hapur Satta Bazar predictions of the Lok Sabha elections 2019 results. Bookies who play Matka, however, are of the view that Prime Minister Narendra Modi is likely to be in a weaker position compared to 2014. The Hapur Satta Bazar predict a major loss for the BJP in Uttar Pradesh where it had bagged 71 of the 80 Lok Sabha seats in the previous Lok Sabha polls.

According to bookies of Hapur Satta market, the BJP is likely to win 240 seats in this Lok Sabha elections. However, with its alliance partners, the ruling party would retain power. "We are expecting the BJP to win 240 seats in the ongoing Lok Sabha elections. The tally may touch 245, but not more than that," an operator in the Hapur Satta market told news agency IANS. Bookies said the BJP would suffer a huge loss in Uttar Pradesh and may lose almost half of its seats.

"In Uttar Pradesh, the BJP will win 41 to 45 seats," said a bookie in the city's once-famous Mandi Patia area. This is mainly because of the alliance of the Samajwadi Party (SP), the Bahujan Samaj Party (BSP) and the Rashtriya Lok Dal (RLD). The predictions are made on the analysis of the 300 seats for which polling has already been completed. In the 2014 Lok Sabha elections, the BJP, riding on Modi wave, had won 282 seats in the previous Lok Sabha elections, giving a landslide victory to the NDA.

Bookies in Madhya Pradesh had projected 246-249 seats for the BJP, adding that the Congress party may bag 76-78. Earlier, Rajasthan's famous Satta Bazar made similar predictions about the Lok Sabha elections results. According to bookies in Jaipur, the BJP will get over 250 seats, with National Democratic Alliance (NDA) winning 300-310 seats in the 2019 Lok Sabha polls. Congress is projected to win 72-74 seats. The result of Lok Sabha elections 2019 will be declared on May 23.

(The above story first appeared on LatestLY on Apr 25, 2019 08:53 AM IST. For more news and updates on politics, world, sports, entertainment and lifestyle, log on to our website latestly.com).