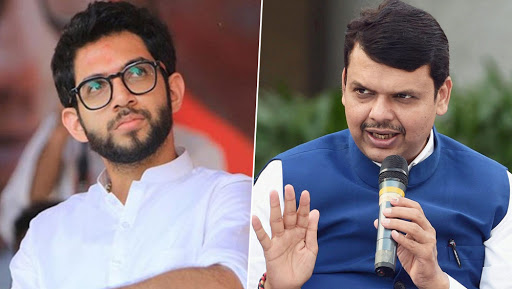 Mumbai, October 26: Days after Assembly election results are out in Maharashtra, with no party being able to cross the magic figure, Shiv Sena announced that they had discussed a 50-50 formula with BJP. Under this condition for the alliance, Shiv Sena and BJP would govern the state for 2.5 years each. As per the details, Shiv Sena chief had asked a written assurance from BJP president Amit Shah, following which he would give his support to BJP to form government in Maharashtra.

Announcing about the party decision to the media, party leader Pratap Sarnaik said on Saturday, "In our meeting, it was decided that like Amit Shah Ji had promised 50-50 formula before LS polls, similarly both allies should get chance to run Govt for 2.5-2.5 years so Shiv Sena should also have CM. Uddhav ji should get this assurance in writing from BJP." Maharashtra: NCP, Congress Deny Alliance With Shiv Sena for Govt Formation; Say 'Will Respect People's Mandate'.

Meanwhile, rumours are high that Shiv Sena wants their youth leader and recently elected MLA from Worli -- Aaditya Thackeray -- to be Chief Minister of Maharashtra. Shiv Sena have till now put six posters reads 'CM Maharashtra only Aditya Thackeray'. One among them has been put outside Matoshree -- Thackeray residence.

However, Congress has kept open its door for a possible alliance with Shiv Sena. On a Shiv Sena's proposal to BJP to run the government for 2.5 years each, Congress leader Vijay Wadettiwar said, "Ball is in BJP's court, it is up to Shiv Sena to decide if they want a 5 year CM or wait for BJP's response on 2.5 yr CM demand. If Sena's proposal comes to us, we will discuss with the high command."

Meanwhile, BJP has called legislative party meeting on October 30 at Vidhan Bhavan to elect a leader in the house. All 105 MLAs to attend the meeting. In the recently concluded Assembly Elections in Maharastra, BJP secured 105 seats, while Shiv Sena won 56 seats. Opposition NCP and Congress won 54 and 44 seats respectively. Both Raj Thackeray's Maharashtra Navnirman Sena and AIMIM won single seats each. The rest 27 seats went to others.