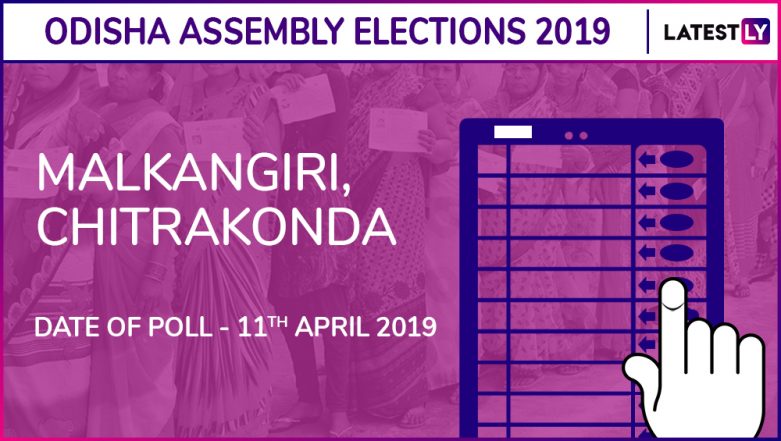 Bhubaneswar, May 23: The counting of votes for all the Assembly seats in Odisha began on Thursday, May 23. Polling in Malkangiri,  Chitrakonda Assembly constituencies in Odisha went to poll in the first phase on April 11. In Odisha, polling was held in four phases between April 11 to April 29. The first phase was held on April 11, second on April 18, third on April 23 and fourth on April 29. The state voted simultaneously for Lok Sabha and assembly constituencies. There are 21 Lok Sabha and 147 Assembly seats in Odisha. Odisha Assembly Elections 2019 Schedule: Polling for All 147 Seats in four phases, Counting of Votes on May 23.

In Odisha, there will be a tough fight between the incumbent Biju Janata Dal (BJD) headed by Chief Minister Naveen Patnaik, the Bharatiya Janata Party(BJP) and Indian National Congress Party will be witnessed.

All You Need to Know About The Malkangiri,  Chitrakonda Assembly constituencies:

For 2019 Assembly polls, the BJP has given its ticket to Padu Majhi while Laxmipriya Nayak of the Congress will contest the election from this seat. The BJD has given its ticket to Purna Chandra Baka while BSP candidate Sanatan Kawasi will contest from the Chitrakonda seat. In the 2014 elections, Biju Janata Dal candidate Dambaru Sisa defeated Indian National Congress candidate Sunadhar Kakari by a margin of 24,730 votes.

The Election Commission in March had announced that voting across the nation will be held on April 11, April 18, April 23, April 29, May 6, May 12 and May 19. Polling in Andhra Pradesh, Arunachal Pradesh, Sikkim and Odisha will be held simultaneously with the Lok Sabha elections 2019. During the upcoming polls, a total of 91 constituencies will go for polls in first phase, 97 in second phase, 115 in third phase, 71 in fourth, 51 in fifth, and 59 each in sixth and seventh phase from April 11 to May 19. Assembly Elections 2019 Schedule: Voting in Andhra Pradesh, Arunachal Pradesh, Sikkim on April 11; Odisha To Witness 4-Phase Polls.

In the last elections held in the year 2014, CM Naveen Patnaik's Biju Janata Dal (BJD) had won 117 seats, while the Congress was the second largest party with 16 seats. The Bharatiya Janata Party (BJP) had managed to win only 10 of the 147 seats in Odisha.