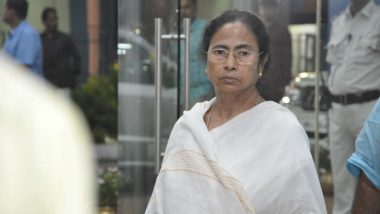 Kolkata, Sep 14: The Trinamool Congress (TMC) party on Thursday hit out at the Bharatiya Janata Party and the Rashtriya Swayamsevak Sangh for cancellation of an event in Chicago where West Bengal Chief Minister Mamata Banerjee was invited. The TMC said the Vivekananda Vedanta Society of Chicago cancelled the event under 'tremendous pressure’.

"It is common knowledge that the BJP-RSS wanted only one major programme to be held in Chicago and that would be under the banner of the Global Hindu Congress (World Hindu Foundation), and this programme would be attended by Mohan Bhagwat," the TMC said in a statement. It further alleged that the organisers were forced to cancel the event.

"To ensure this happened, intense pressure was mounted on Vivekananda Vedanta Society in Chicago to cancel the programme for which Mamata Banerjee had confirmed. Subsequently, the programme was cancelled," the TMC alleged. On Thursday, the Ministry of External Affairs dismissed reports that Banerjee was denied permission to visit Chicago.

"We did not receive any request for clearance regarding the visit of Ms Mamata Banerjee to Chicago for the event. The reports about the denial of permission are, therefore, not true," MEA spokesperson Raveesh Kumar said. However, the TMC described the ministry's explanation as 'low on facts'. On Tuesday, Banerjee said an unholy conspiracy was hatched to block her visit to Chicago.

"I wanted to go to Chicago... I could not go there because of an unholy conspiracy hatched by certain people. This incident has given me a lot of pain," the TMC chief had said at a gathering in Belur Math, the global headquarters of the Ramakrishna Math and Mission, to mark the 125th anniversary of Swami Vivekananda's historic speech at the Parliament of the World's Religions held in Chicago.

(The above story first appeared on LatestLY on Sep 14, 2018 09:43 AM IST. For more news and updates on politics, world, sports, entertainment and lifestyle, log on to our website latestly.com).