Narendra Modi Trains Guns at Opposition After Forces Kill 2 Militants in Kashmir, Says 'They Will Question Why Modi Killed Terrorists During Polling'

Earlier in the day, a team of security personnel raided a terror hideout in South Kashmir's Shopian and killed two militants. No major Opposition party is yet to raise any question on the security operation. 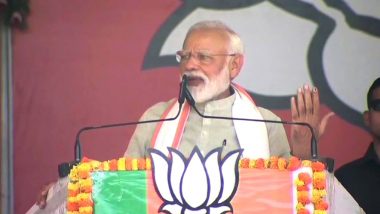 New Delhi, May 12: Prime Minister Narendra Modi sharpened his assault against the rivals after the security forces gunned down two militants in Jammu & Kashmir's Shopian district on Sunday. The PM, while addressing a rally in Uttar Pradesh's Kushinagar, said the Opposition would now raise hue and cry on why the insurgents have been neutralised on the day of polling.

Modi said a section of his opponents will accuse his government of violating the Model Code of Conduct by allowing the soldiers to carry out their duty while the sixth phase of voting was underway. Modi's Statement on 'Effect of Clouds on Radar Signals During Balakot Strike' Deleted By BJP Twitter Handles

"Today terrorists were killed by our Army in Kashmir. Now some people are worried as to why did Modi kill the terrorists when voting is underway? An armed terrorist is attacking,do my jawans go to the Election Commission to seek permission to kill him," the Prime Minister questioned, while addressing a BJP rally in eastern Uttar Pradesh's Kushinagar region.

Earlier in the day, a team of security personnel raided a terror hideout in South Kashmir's Shopian and killed two militants. No major Opposition party is yet to raise any question on the security operation.

The Model Code of Conduct, which is in force since March 11 after the announcement of polling dates, does not prohibit the armed forces from discharging their duty.

Modi's reference to the military encounter while targeting the Opposition comes amid the charges of "politicising the Army" levelled against him. Congress president Rahul Gandhi had accused the PM of attempting to project the country's armed forces as his "personal fiefdom".

(The above story first appeared on LatestLY on May 12, 2019 01:22 PM IST. For more news and updates on politics, world, sports, entertainment and lifestyle, log on to our website latestly.com).