Prime Minister Narendra Modi while addressing a programme on Thursday organised on the occasion of the inauguration of the newly constructed Infosys Foundation Vishram Sadan at the National Cancer Institute located in Jhajjar district praised Haryana Chief Minister Manohar Lal. 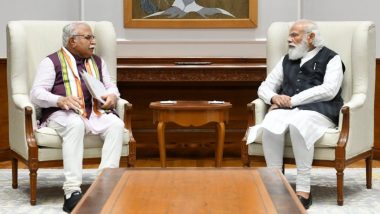 Addressing the participants, he said: "I have had the opportunity to work for a long time in Haryana and I have observed the work of many governments closely, but Haryana has got an extremely honest government under the leadership of Manohar Lal in the past many decades." Haryana CM Manohar Lal Meets PM Narendra Modi, Discusses Farmer Issues, Karnal Incident.

While inaugurating the Vishram Sadan through video conferencing, the Prime Minister praised the efficient working style of the Chief Minister and said the present state government only "thinks for the betterment of the state".

"If we evaluate the development of Haryana, we can see that the state has got the best and most constructive government of the last five decades," said the Prime Minister.

The Prime Minister said he has known Manohar Lal for a long time, but after becoming the Chief Minister, he has outshone himself.

"The way the Haryana government is doing innovative work under his leadership, that style of work is also adopted by the Central government and today Haryana has become a source of inspiration for other states," added Modi.

Thanking the Prime Minister, the Chief Minister said the state will live up to the trust and expectations shown by the Central government and the Prime Minister and whatever responsibility would be given to Haryana will be fulfilled.

(The above story first appeared on LatestLY on Oct 21, 2021 05:48 PM IST. For more news and updates on politics, world, sports, entertainment and lifestyle, log on to our website latestly.com).