he Congress-led govt of V Narayanasamy lost majority in the Puducherry assembly on Monday. Puducherry legislative assembly speaker VP Sivakolundhu announced that the ruling government lost majority as V Narayannasamy and ruling Congress MLAs walked out of the assembly. 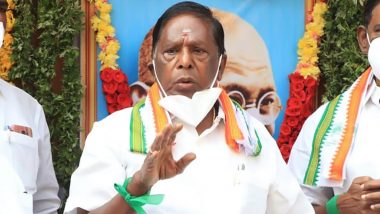 On February 21, two MLAs of the ruling alliance resigned, taking the strength of the coalition to 12 in the 33-member assembly. Telangana governor Tamilisai Soundrarajan, who took as additional charge of Puducherry Lieutenant Governor, on February 18 directed the Chief Minister to prove his majority in Assembly.

On Sunday, Congress' K Lakshminarayanan and DMK's K Venkatesan announced their resignations. All India NR Congress founder-leader N Rangasamy, who is the Leader of Opposition, had claimed that the government had lost its majority after four of the MLAs of the ruling party resigned in the last 25 days. Since July last year, seven MLAs of the Congress-led alliance had resigned from the government. Kiran Bedi Thanks Govt of India For a 'Lifetime Experience in Serving Puducherry' After Being Removed as L-G.

At present, the Congress has only nine legislators in the assembly, while two are from DMK and one independent. Meanwhile, the opposition has 14 members in the House out of 26. The AINRC has seven MLAs and its ally AIADMK four. The Chief Minister has accused the BJP of engineering defections. He also alleged that the Centre undermined the union territory and deprived it of funds. Narayanasamy exuded confidence in coming back to the power.

(The above story first appeared on LatestLY on Feb 22, 2021 11:48 AM IST. For more news and updates on politics, world, sports, entertainment and lifestyle, log on to our website latestly.com).