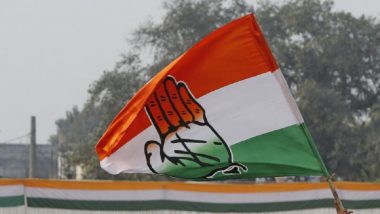 New Delhi, October 8: The Bharatiya Janata Party (BJP) may lose power in Rajasthan in the upcoming elections while the Congress is projected to win with a majority, a recent pre-poll survey has predicted. Rajasthan, which is currently under the leadership of BJP's Vasundhara Raje, has 200 assembly constituencies in total. A Times Now Opinion Poll on Monday predicted that the Congress may win 115 seats which is 47 percent of the total vote share, whereas the Bharatiya Janata Party (BJP) is likely to win 75 seats with a total vote share of 41 percent, while the other parties are predicted to win 10 seats which accounts to 12 percent of the total vote share. Rajasthan Assembly Elections 2018 Full Schedule And Dates.

It must be noted that the term of the present government expires on January 20, 2019. The polling in Rajasthan will be held in a single phase on December 7 while the counting of votes will be done on December 11. Check Full Schedule and Dates of Upcoming Assembly Polls.

The other pre-poll surveys have also predicted BJP's defeat in Rajasthan. In the ABP News-CVoter survey, which was released on Sunday, the BJP is precited to lose in Rajasthan citing that the Congress is best placed in the state, where its state president Sachin Pilot is the first choice of the voters for the chief minister's post in the upcoming polls.

The opinion poll predicted that the Congress is likely to win 142 seats in Rajasthan against the BJP which would manage to win 56. The survey says that  Pilot leads Raje as the popular choice for the chief minister's post with 36 per cent voters preferring him.

(The above story first appeared on LatestLY on Oct 08, 2018 08:56 PM IST. For more news and updates on politics, world, sports, entertainment and lifestyle, log on to our website latestly.com).