Sachin Pilot and rebel Congress MLAs in Rajasthan contacted top leader Congress leadership, reporting news agency ANI citing sources. According to the news agency, the Party asked some of the rebel MLAs to tender an unconditional apology, following which they are free to meet the top leadership and express grievances. 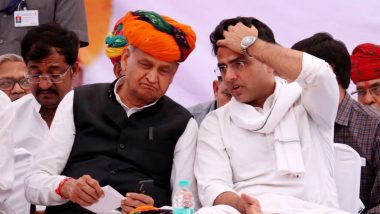 Jaipur, August 10: A few rebel Congress MLAs in Rajasthan contacted top leader Congress leadership, reported news agency ANI citing sources. According to the news agency, the Party asked some of the rebel MLAs to tender an unconditional apology, following which they are free to meet the top leadership and express grievances. Rajasthan Political Crisis: 'If High Command Forgives Rebels, I Will Welcome Them Back', Says CM Ashok Gehlot.

According to NDTV, the development came after a meeting between Priyanka Gandhi Vadra and Pilot around two weeks back. However, Pilot camp reportedly denied the development. The reports of reconciliation between the two camps surfaced four days before the commencement of the special session of the Rajasthan Assembly.

Meanwhile, Rajasthan Chief Minister Ashok Gehlot was against any outreach to the rebel MLAs. He also accused Pilot of creating a political crisis in the state on the behest of the Bharatiya Janata Party (BJP). Rajasthan Political Crisis: Six 'BSP MLAs' Move Supreme Court, Seek Transfer of Case on Merger With Congress From HC.

On Sunday, Gehlot wrote a letter to all MLAs, appealing to them to listen to the people's voice to save democracy and to stand by the truth. The Chief Minister sought cooperation from them to what he called to fulfil the promises of development and prosperity of the desert state.

The Congress had 125 MLAs with its individual tally at 100. However, now with 19 MLAs gone, it has 106 MLAs and minus three Independent MLAs, this number comes down to 103. One MLA Bhanwarlal Sharma is unwell, and hence the effective figure is 102.

If the six BSP MLAs get a stay order, this number gets reduced to 96 which will result in the fall of the Gehlot government. The BJP with 75 MLAs (including 3 RLP MLAs) can extend outside support to the Pilot group (19 MLAs) and three Independents which takes their score to 97.

(The above story first appeared on LatestLY on Aug 10, 2020 01:51 PM IST. For more news and updates on politics, world, sports, entertainment and lifestyle, log on to our website latestly.com).