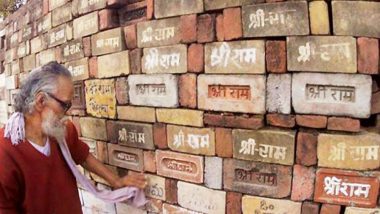 Jaipur, August 4: Congress leader and Rajasthan Transport Minister Pratap Singh Khachariyawas announced on Tuesday that he would be donating his two months' salary and a silver brick for the construction of a grand Ram Mandir in Ayodhya. He also suggested others to follow suit by donating an amount for the temple construction.

"We should all pledge to donate something towards the construction of Ram Mandir. I will donate my two month's salary and a silver brick," PS Khachariyawas said. Uma Bharti Reaches Ayodhya Day Before PM Modi's Arrival, Offers Prayers at Saryu Ghat.

We should all pledge to donate something towards the construction of #RamMandir. I will donate my two month's salary and a silver brick: Rajasthan Transport Minister Pratap Singh Khachariyawas pic.twitter.com/AUVLSNwvcU

The statement by the Rajasthan Minister comes amid an apparent change in the party's approach towards the Ram Mandir issue. After vehemently opposing the demolition of Babri Masjid at the disputed site, the party, since the 2019 verdict by Supreme Court, has welcomed the construction of temple.

Former Madhya Pradesh CM Kamal Nath organised a recitation of Hanuman Chalisa at his residence a day ahead of the Ram Mandir Bhumi Pujan or foundation stone-laying ceremony in Ayodhya. He also appealed people to send soil to Ayodhya to be used in the construction of a grand temple.

The Congress top brass, however, has adopted a muted approach. Senior leaders including party president Sonia Gandhi, former chief Rahul Gandhi and Congress' UP in-charge Priyanka Gandhi Vadra are yet to publicly react on the foundation laying-ceremony to be held in Ayodhya tomorrow.

(The above story first appeared on LatestLY on Aug 04, 2020 08:37 PM IST. For more news and updates on politics, world, sports, entertainment and lifestyle, log on to our website latestly.com).